Grey’s Anatomy showrunner Krista Vernoff is not here for your speculation that Ellen Pompeo’s recently trumpeted payday is to blame for the dismissal of longtime castmates Jessica Capshaw and Sarah Drew. 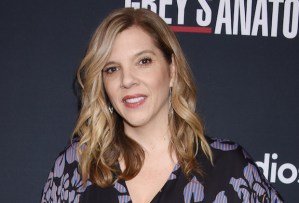 Hours after the news broke that Capshaw and Drew would be wrapping their respective runs as Arizona and April on ABC’s top-rated drama after Season 14, Vernoff tweeted her condemnation of speculation that Pompeo’s new deal — $10 million per season, for the next two years — dictated the need to winnow the series’ ranks.

That intimation “is wrong and hurtful and misguided,” Vernoff wrote. “It smacks of an old, broken, patriarchal notion that women must be pitted against each other and that one woman’s success will be costly to others.” Vernoff goes on to note that front woman Pompeo has “advocated passionately for her fellow cast members,” and reiterated that the decision to shake up the cast “was a creative one…. And that is the whole story.”