By mid-May, the broadcast networks must make some tough calls as to which series will return for the 2018-19 TV season, and which… won’t.

Next up is a workplace comedy that’s in danger of being out of work. 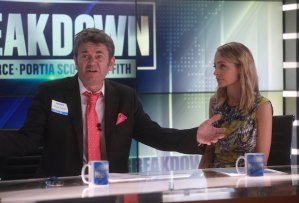 THE CASE FOR KEEPING | The Tina Fey-produced sitcom is the closest thing we have these days to another 30 Rock: a snappy, endlessly clever workplace comedy that serves up dozens of quotable punchlines each week. Briga Heelan leads a delightful ensemble of weirdos as TV news producer Katie, whose career is thrown for a loop when her overbearing mom Carol (Andrea Martin) decides to reenter the workforce as an intern on Katie’s news program. Few shows anywhere on TV can match Great News‘ pure laughs-per-minute ratio, and in a just world, John Michael Higgins would be getting Emmy attention for his riotous turn as pompous, old-school news anchor Chuck Pierce. Plus, it’s attracted an impressive array of guest stars, led by Fey as cutthroat executive Diana St. Tropez. (Even Nicole Richie is funny! Who knew?)

THE CASE FOR CUTTING | It may be too clever for its own good: Great News managed to eke out a Season 2 renewal after a brief midseason test run, but sagged in the ratings this season as part of NBC’s new Thursday night comedy lineup. Averaging 3 million total viewers and a 0.7 demo rating for its sophomore run, it ties Fox’s Brooklyn Nine-Nine as broadcast TV’s lowest-rated sitcom and, among all NBC fare, only edges out Friday night’s Taken. Plus, it hasn’t earned the kind of awards attention (zero Emmy nominations) or critical buzz that would justify a “prestige” renewal. Great News ultimately feels like one of those niche cable or streaming shows with a small but loyal following… which might not be great news for NBC’s bottom line.

Vote below, then state your own case for keeping or cutting Great News.