What seems like a happy ending is merely an awkward new beginning on The CW’s Life Sentence.

The drama, which made its long-awaited premiere on Wednesday, stars Lucy Hale (Pretty Little Liars) as Stella Abbott, a young woman who — until very recently — believed she was going to die of cancer. And while she’s obviously pleased to learn that she’s been cured, she’s less pleased to discover that her family, even with the best of intentions, has been keeping a few secrets from her.

The Abbott family is a complicated brood — honestly, each one of them could carry a spinoff with the amount of baggage they’re hiding — so I’ll run through this list pretty quickly: Stella’s mother Ida (New Girl‘s Gillian Vigman) has fallen in love with a woman, her father Paul (Nip/Tuck‘s Dylan Walsh) is doing everything in his power to keep their house, her brother Aiden (Young & Hungry‘s Jayson Blair) has impregnated his married girlfriend, and her sister Elizabeth (2 Broke Girls‘ Brooke Lyons) has given up her dreams to focus on her family.

As if learning these family secrets isn’t enough to rock Stella’s boat, the Abbotts — mostly inadvertently, though sometimes directly — blame her for their problems, reminding her that she isn’t the only person whose life was affected by her battle with cancer. (Hell, even her doctor says that focusing all of her attention on curing Stella prevented her from pursuing a love life of her own.)

But the most complicated part about Stella’s “new” life is her relationship with Wes (Once Upon a Time‘s Elliot Knight), her charming British husband with whom she has “Sara Bareilles candle sex” every night. “I don’t want anything to change,” she tells him atop the series’ debut hour, which means — of course — things are going to change. Big time. 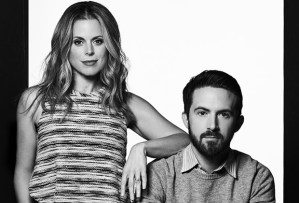 TVLine spoke with series creators Richard Keith and Erin Cardillo about some of the pilot’s biggest moments, as well as what the rest of the season has in store for the Abbotts:

TVLINE | Since this is a rare show that isn’t based on a book or some other source material, I get to ask: Where did this idea come from?
KEITH | When Erin and I started out as writers, we were writing features separately and giving each other notes. From that process, we decided that we liked writing together and wanted to work as a team. I’d written a feature that was one of those romantic cancer dramedies where boy meets girl, boy falls in love with girl, boy finds out girl is dying from cancer and agrees to spend the rest of his life with her, boy lives on after she dies. After Significant Mother ended, we revisited the script — but in the eight years that passed since I wrote it, the script had become derivative of other movies that came after it. So we thought it would be fun to make the finish line of that movie the starting line of a new project. What if they agreed to spend the rest of their lives together, only to discover that her life was a whole lot longer than they expected?

TVLINE | Is Stella and Wes’ relationship one we’re supposed to root for? Or should we be as critical of it as she’s starting to be?
CARDILLO | We’re hoping fans will root for them. For us, it’s a will-they-won’t-they situation for a couple that already did. Our hope is to keep that alive for them even if their marriage goes through issues or changes throughout the course of the series.
KEITH | In marriage, you do always think about when and how you met. Was it meant to be? Was it for the right reasons? They got into this marriage for all the right reasons when they did. But now those reasons are gone, so the question is: Do they owe it to each other to fight to stay together — or to let her each other go…
CARDILLO | …and to see if they come back together later? All those questions will be a through line in the series.

TVLINE | I’ll be honest, I was a little surprised at how much the family sort of dumped on her in the pilot.
CARDILLO | They’d been putting up a front for quite some time. And once one person starts being honest — even though her mom didn’t mean for her to find out the way she did — it opens up a floodgate.
KEITH | They were also happy to put off their problems until she passed away, which seemed far enough in the future that they don’t know what to do when they find out she’s going to live. They’re shell-shocked.

TVLINE | Will future episodes perhaps change my opinion about them?
KEITH | Our hope is that, in a way, you feel bad for all of them. They all got dealt a hand they didn’t ask for. They didn’t even know they were playing. As the show goes on, you’ll understand how far everyone had to go in order to make Stella’s life as rosy as possible.
CARDILLO | When you watch Episode 3, a lot of sympathy for them will start to come into play. I think the series really becomes what it’s going to be in Episode 3.
KEITH | It’s almost like we have a two-part pilot with Episodes 1 and 2.

Did you enjoy your first night with the Abbott family? Grade the series premiere below, then drop a comment with your full review of Life Sentence.