Going into Night 4 of The Voice’s Season 14 Blind Auditions, I was thinking that Alicia Keys wasn’t kidding, like, at all when she told Kelsea Johnson that she was an unstoppable beast who had every intention of winning the show again, as she had with Chris Blue in Season 12. Ahead of Tuesday’s episode, her team was made up damn near entirely of singers that I either liked a bunch (Kelsea and Britton Buchanan) or flat-out loved (Johnny Bliss, Christiana Danielle and my current favorite, Jaclyn Lovey). Did the coach recruit any more real contenders on Tuesday? Read on and find out… 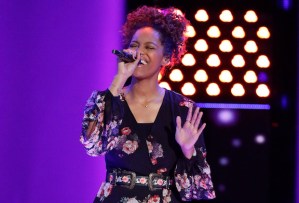 Spensha Baker (Team Blake), “Blackbird” — Grade: B+ | Now this is a voice that makes ya stop flipping through Facebook posts to look up and see who it is (which makes it all the more stunning that, after a career rejection, she abandoned her musical pursuits). Her full-throated take on The Beatles classic took us to church and answered yes before we could even ask, “Can I get an amen?” A bit more wobble to the vocal than I personally like — Blake called it a “low vibrato” — but this wannabe country-soul star clearly has the goods. Loads of potential.

Alexa Cappelli (Team Kelly), “I’ve Got the Music in Me” — Grade: B | Gotta admit, when I think of this song, I think, “Cheese.” So by auditioning with this Kiki Dee oldie — which is actually pretty awesome; dunno why I think “cheese” — this 18-year-old was working at a distinct disadvantage when it came to winning me over. However, by the time she was finished, she had not only impressed me but Kelly, who insisted they duet right then and there on her “People Like Us.” Strong voice, great runs, but I’m not sure Alexa is interesting enough to make it to the Top 12.

Wilkes (Team Blake), “One Headlight” — Grade: C+ | Davison, Jamella, Jamai and now Wilkes. What do Season 14’s contestants have against first and last names? Dropping one doesn’t automatically make them Cher, after all. But I digress… Wilkes was fine. A little shouty at times but basically fine. However, it didn’t bode well for him that the most memorable thing about him was his glorious mane of strawberry-blond hair. There are too many singers in the mix this season with really distinctive voices and/or singing styles for Wilkes to last long. 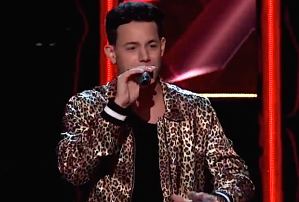 Jaron Strom (Team Blake), “This Magic Moment” — Grade: C | This web-designer-by-day, made a Motown fan by his grandpa, brought a little old-school charm to his Ben E. King cover. But dang, it sure seemed the whole time like he was trying hard. Shouldn’t it come off a little more effortless? Jaron has a pleasant enough voice when he’s not straining to make an impression, but aside from his leopard-print jacket (which would have looked great on either a T-Bird or a Pink Lady), he was pretty forgettable. One Battle, and his war will be lost.

Terrence Cunningham (Team Alicia), “My Girl” — Grade: A- | Unless the reinvention is a bungle, I’m a real sucker for revamps of familiar songs. So I was predisposed from the first note to love this amazingly-coiffed pianist’s downbeat take on The Temptations smash. Even if I hadn’t been predisposed, I couldn’t have resisted. He sang with such breathtaking tenderness that he made me want to hush people who weren’t even talking so as not to interrupt him. And that falsetto — high there! (Unlike Wilkes, as cool as Terrence’s hair was, it was not in the slightest the most interesting thing about him.)

Aaand getting the montage treatment were Jess Lee, who joined Team Blake, and Megan Lee and Jordyn Simone, both of whom joined Team Alicia.

So, which coach do you think has the strongest team so far? Which singer did you think had Tuesday’s best Blind Audition? Vote in the poll below, then hit the comments.