After all, the ambitious Executive Assistant Director of the FBI (played by Kim Rhodes) already has rattled the ranks by benching Prentiss and putting JJ in charge, all while putting the BAU on notice that their admittedly successful strategies sometimes are… suspect.

Here, original cast member (and occasional episode writer) Kirsten Vangness previews Barnes’ butting-in, which will be followed by a stealthy BAU op that fuels one of the actress’ favorite episodes ever.

TVLINE | Criminal Minds is back this week, and we’ve got Barnes tagging along with the team. On a scale of one to 10, how awkward is that for the gang?
Oh, like a 14. It’s weird. It’s real weird. She’s like the Dolores Umbridge of the BAU. Kim Rhodes is so delightful, so it is very weird. It’s like how when I’m talking to Adam Rodriguez as Kirsten, I’m totally normal, and then we go to do a scene and I sneer at him and I give him dirty looks as Garcia. We do scenes with [Kim], and once we hear “Cut!” everybody’s like, “I’m sorry, I’m really sorry,” because Barnes is burning down our house systematically and we’re trying to hose it all down at the same time.

TVLINE | Is Garcia somewhat insulated from Barnes tagging along, given that she typically stays behind?
No one is safe. Trust me. When we were shooting the episode that I wrote [which came two weeks before Rhodes’ debut on the mothership], Erica Messer, our showrunner, said something off-handily to me and I was like, “What?” She was like, “Oh, yeah, leading up to the end of the season we’re doing this arc….” She didn’t want to tell me because she wanted to tell everybody at the same time. So we’re all sitting in the table read for this episode and everybody’s jaws hit the floor. We’re all looking at each other like, “What’s going on?” You keep thinking, “This isn’t really happening, no, no, no,” but it’s really happening. She had to sit us down and kind of talk us through it, and even talking us through what happens is terrifying. 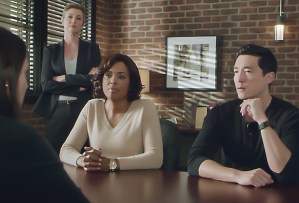 So you’ve got the awkwardness of Barnes, that huge obstacle of having someone that is in charge of your work eagle-eyeing everything you’re doing when your job is entirely based on intuition. It’s a totally impossible situation. And the episode that follows this one builds on that, and the bullet train just goes! That next episode (airing March 14) is certainly on my Top 5 favorite episodes ever of Criminal Minds.

TVLINE | Is that the one where the team works a case in secret away from Barnes? Off-book?
Yes. And there are so many Easter eggs and joys for people who watch the show on the reg in that episode and, God, through the whole end of the season. There’s so many cool things that happen. And you have Adam Rodriguez directing one, then you Matthew Gray Gubler directing one, and then you have Joe Mantegna directing one, all back-to-back-to-back, which was dreamy.

It’s the dreamiest place to work anyway. People say that, but I don’t know if everybody gets it. All eight of us were texting each other last night, gushing about how excited we are the show’s coming back on. And I spent all of Sunday with Paget [Brewster] and Aisha [Tyler] and A.J.[Cook] in my hot tub just talking, because we do that once a month…

TVLINE | Wait, how come that doesn’t get Instagram’d?
That’s a real thing! We do that because [Criminal Minds] is such a delightful place to work. I’m just so appreciative I get to do this for a living and I get to do it with these people that are all so kind and creative. It’s an embarrassment of riches.

But these upcoming episodes, I think, are going to be very disturbing for people. And they were very hard to do.

TVLINE | Hell, it was hard to just watching Barnes confront Prentiss in that recent episode.
Oh, that’s nothing, my friend. That is nothing. It’s amazing what the writers did because it’s a complicated, Jenga-like, house of cards/Rubik’s Cube type of thing. They tore it down and that, I think, is a hallmark of a really good writer — the ability to not hold onto a shred of that, to just take it all away and then try to figure out how you go from there.

TVLINE | Well, that’s what’s kind of brilliant. Last season we saw the team get these wins, finally getting Reid out of prison and stuff, but then a year later Barnes presents it all from this completely different point of view and you realize, “Oh, man. They have kind of been breaking rules left and right.”
Erica and I wrote that episode [where Prentiss deleted Reid’s incriminating confession] and we were very cognizant of like, “OK, this is what we could do…. We could make it that she makes not the greatest choices. She could have told the truth about that.” We went into that going, “You know what? Let’s keep this because this could be really satisfying when there’s a payoff.” That’s the great thing about any good antagonist, is that they kind of have a leg to stand on.

Watch a sneak peek from the March 7 Criminal Minds,
then read on for more from Kirsten Vangsness:

TVLINE | If the team is working surreptitiously in the March 14 episode, does that mean you can’t use the jet and other typical resources?
I can’t even. Like I said, that’s in my Top 5 favorite, you have no idea. It’s extraordinary. That episode is written by Breen Frazier, and he’s really deft at magical realism mixed with the facts and a cool, really good storyline, so he took things away and put things in that no one is used to. It’s really cool and scary and weird, but also funny in ways that you don’t expect.

TVLINE | Before we go, what can you say about the episode later this season where Garcia’s family history is revisited?
That one is really neat; we’re in the middle of shooting it right now. Because the show’s been on this long, the writers put things in one episode like, “Why is her name Garcia?” And in another episode the next season, she makes a reference to four stepbrothers. Well, what they did was they took allll those little moments and put it all together and now you get to see all of her sort of tragic past, and you get to see some of her family. You see her going back home and having to negotiate some stuff, so it’s a quieter show, but we still have a case to whet people’s murder-camp whistle.