Even before The Voice’s Season 14 Blind Auditions continued on Monday, a Top 12 was forming. Maybe only in my mind/our minds, but still… That counts… er, right? Pryor “I Eat Gravel for Breakfast” Baird was on the list, as was Jaclyn “I’m 98.5 Percent Pixie Dust” Lovey and Kyla Jade, whose Blind Audition I suspect only hinted at what she had to offer. (For the moment, I’m also reserving spots for Kelsea Johnson, Justin Kilgore, Brynn Cartelli and the one-man charm machine that is Britton Buchanan.) And, after Night 3 of the Blinds, I added another couple of names to my imaginary Top 12. Who made at least my cut? Read on for the reviews, then pick your favorite in the poll that follows this recap and chime in with critiques of your own. 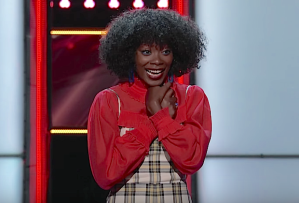 Christiana Danielle (Team Alicia), “Hotline Bling” — Grade: A | This telegenic native of Fort Wayne, Ind., got Adam to turn his chair before she’d even finished singing her first line. Could not say I blamed him a bit, either. Christiana’s spare rendition of Drake’s hit not only showed off her stunning range but packed an emotional wallop that I didn’t previously associate with the song. And maybe even more important than how strong her voice was, was how creative her phrasing was. I couldn’t have dug this more if somebody’d handed me a shovel.

Brett Hunter (Team Blake), “She’s a Bad Mama Jama” — Grade: B | This 30-year-old revealed in his pre-performance how-do-ya-do that he’s so close to his brother that they share a bed. After hearing him sing, I was torn as to whether he’d better get used to that arrangement. On the one hand, I quite liked his voice — a little Bruno Martian, a little Stevie Wonderful. On the other, his act felt a little gimmicky. Maybe it was just the Weird Al hair? Or the ukulele? Even Blake, the only coach who turned their chair for Brett, declared, “I have the next Tiny Tim!”

Jamai (Team Alicia), “U Got It Bad” — Grade: C | Interesting backstory (he has a singing-telegram company). Interesting name (it’s pronounced juh-my). Interesting build-up (a friend of his called him a “New Age Bobby Brown”). But did he have the voice to hold our interest? Perhaps. There were certainly moments in his performance that sounded promising, even exciting. However — maybe owing to nerves — he didn’t seem to have a lotta control over his vocal, and ultimately, left me thinking, “Cannon fodder for the Battles.” 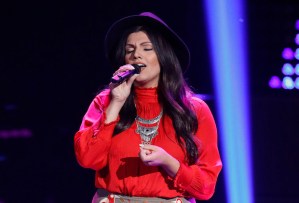 Mia Boostrom (Team Adam), “PILLOWTALK” — Grade: C- | After Mia shared the story of how she was fighting her way back from being known less for her music than her weight, I feel like a jerk for not loving her Zayn Malik cover. Unfortunately, yeah, no… I did not love her Zayn Malik cover. Her lower register made a bit of an impression, just not one that was gonna last. In fact, when it comes time for her Battle, I suspect I’m gonna have to relook her up on YouTube to remember who she is.

Jackie Foster (Team Kelly), “What About Us” — Grade: C+ | Before her performance, it seemed like the show was positioning this musical theatre student-turned-alt-rocker to be this season’s Emily Luther. Then — oh dear — she sang. And, while she wasn’t terrible or anything, she didn’t come anywhere near Emily’s at-her-best pitch-perfect greatness. (Yeah, I’m still mad about her a season later.) And this Pink cover got way too yelly to leave me thinking Jackie would make it to the Knockouts.

Reid Umstattd (Team Adam), “Take Me to the Pilot” — Grade: B+ | Performing solo for the first time ever, this former band member (who packed it in rather than keep touring after getting married) sang with great clarity and oomph. And there was certainly something appealing about hearing a pop voice as pure as this Texan’s. But I don’t think I noticed in his Elton John cover anything interesting enough to make me think he’ll stand out from the pack in the long run. Maybe that’s OK — maybe being a great singer is enough, and that’s the whole point. However, I suspect he’s gonna need to pull something from his bag of tricks to stick around in the competition. 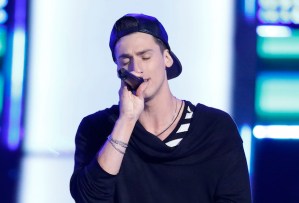 Jorge Eduardo (Team Kelly), “Despacito” — Grade: B | This son of a mariachi singer got a four-chair turn when he competed on The Voice in Mexico. Here, he got Kelly (and only Kelly) to swivel pretty much immediately — so fast, in fact, that I’m not sure she wasn’t just excited that someone was covering Luis Fonsi feat. Daddy Yankee. That said, Jorge gave a performance that was as impressive for its seeming effortlessness as it was for its vocal precision. He feels like a contender.

Austin Giorgio (Team Blake), “How Sweet It Is (to Be Loved By You)” — Grade: C+ | “I’m telling you guys, [my performance is] gonna be nuts,” said this JV Rat Packer in his introductory package. And he wasn’t blowing smoke. On stage, he was a rollicking good time. Unfortunately, his performance was more fun to watch than to listen to. Somewhere in Austin, I think there’s a voice that can be as smooth as a velvet smoking jacket. And heaven knows he has the moves to put on a must-see show. But to get as far as I believe he can in the contest — and that’s further than this C+ suggests — he’s gonna have to put his vocals first, showmanship second.

Johnny Bliss (Team Alicia), “Preciosa” — Grade: A | This 26-year-old karaoke host — blessed with a smile that’s brighter than Times Square — didn’t just vocalize with great passion in his powerful pipes (although did that, too). He also put on the kinda energetic show that draws you in, works you up and makes you wish you remembered more from high-school Spanish class than “vamanos” so you could sing along. (Or is that last one just me?) No wonder Johnny got a four-chair turn, motivated Adam to use his Block on Kelly, and inspired Alicia to plead her case in a performance sexy enough to get Kelly to admit, “If I liked women, I’d like Alicia!” Johnny has “it”!

So, who did you think gave Monday’s best performance? Vote in the poll below, then hit the comments.