Second time’s the charm: Jimmy Kimmel returned for another shot at hosting the Oscars on Sunday night, and he didn’t shy away from the controversies swirling around Hollywood.

After an old-school, black-and-white newsreel intro — which joked that Armie Hammer “was born when a witch put a curse on a Ken doll” and highlighted Salma Hayek bringing the fish guy from The Shape of Water as her date — Kimmel addressed the elephant in the room: last year’s infamous Best Picture envelope mix-up, aka Envelopegate. “This year, when you hear your name called, don’t get up right away,” he pleaded. “Give us a minute.” 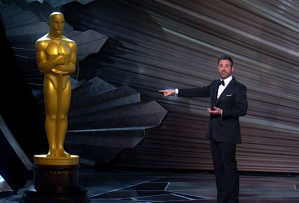 He also addressed the noticeable absence of exiled producer Harvey Weinstein, saying that Weinstein was only the second person ever expelled by the Academy, after a guy caught sharing screeners. The poor guy “got the same punishment as Harvey Weinstein for giving his neighbor a copy of Seabiscuit on VHS,” Kimmel joked. Later, he pointed to the Oscar statuette as a man to look up to: “He keeps his hands where you can see them, never says a rude word… and most importantly, no penis at all. He is literally a statue of limitations.”

Kimmel admitted that Hollywood has a long way to go in the gender-equality department: “We made a movie called What Women Want… and it starred Mel Gibson.” But he did signal a positive note, declaring that “if we can work together to stop sexual harassment in the workplace… women will only have to deal with harassment all the time at every other place they go.”

* He referred to this year’s nominees as “a group of outstanding and inspiring films… each and every one of which got crushed by Black Panther this weekend.”

* On the box-office dominance of Wonder Woman and Black Panther: “I remember a time when the major studios didn’t believe a woman or a minority could open a superhero movie… and the reason I remember that time is because it was March of last year.”

* On Best Picture nominee Get Out: “None other than President Trump called Get Out the best first three-quarters of a movie this year.”

* On gay-themed drama Call Me By Your Name‘s low box-office total: “We don’t make films like Call Me by Your Name to make money. We make them to upset Mike Pence.”

* On Meryl Streep’s incredible run of Oscar nominations: “The longest she ever went without being nominated was from 1992 to 1995… and that’s only because those were the years she was in prison.”

* On the interspecies love story The Shape of Water: “We will always remember this year as the year men screwed up so badly, women started dating fish.” 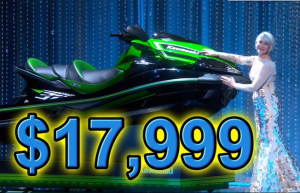 Before the first award was handed out, Kimmel told the crowd that in the interest of saving time, the winner giving the shortest acceptance speech tonight will be awarded a brand-new jet ski — retail price: nearly $18 grand! — presented, The Price Is Right-style, by Oscar winner Helen Mirren. (“Helen Mirren not included,” Kimmel noted.)

What’d you think? Give Kimmel’s Oscars monologue a grade in our poll below, then drop your thoughts in a comment below.