David Ogden Stiers, best known for his role as Major Charles Winchester on the classic TV show M*A*S*H, has died at the age of 75, The Oregonian reports. According to his agent, Mitchell Stubbs, the actor died peacefully in his Newport, Ore., home after a battle with bladder cancer. 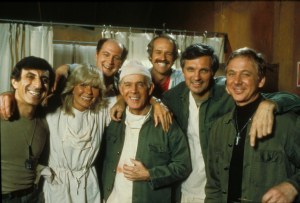 Stiers first joined M*A*S*H in its sixth season, filling the void left by Larry Linville’s Major Frank Burns, who departed the series at the end of Season 5. Stiers received back-to-back Emmy nominations for Outstanding Supporting Actor in a Comedy Series in 1981 and 1982.

David Ogden Stiers. I remember how you skateboarded to work every day down busy LA streets. How, once you glided into Stage 9, you were Winchester to your core. How gentle you were, how kind, except when devising the most vicious practical jokes. We love you, David. Goodbye.

After M*A*S*H, Stiers remained a regular presence on the small-screen. In 1984, he earned his third Emmy nomination for his supporting role as William Milligan Sloane, founder of the U.S. Olympic Committee, in the NBC miniseries The First Olympics: Athens 1896. He later guest-starred on episodes of Star Trek: The Next Generation, Matlock, Touched by an Angel, Wings, Frasier and Murder, She Wrote; he also recurred as Oberoth on Stargate Atlantis, and as Mr. Bauer on Two Guys and a Girl. In addition, he portrayed District Attorney Michael Reston in eight Perry Mason TV movies.

In addition to his live-action work, Stiers was a successful voice actor, most notably voicing Cogsworth in Disney’s 1991 classic Beauty and the Beast. Additional credits included Pocahontas, The Hunchback of Notre Dame and Lilo & Stitch.