Revenge was the name of the game on Thursday’s RuPaul’s Drag Race All Stars, as five eliminated queens were given a second chance at drag superstardom.

Much to the annoyance of of the five remaining contestants, a handful of rejects — Morgan McMichaels, Thorgy Thor, Chi Chi DeVayne, Milk and Aja — returned to challenge them in a girl group lip sync-off. But first, the Bitter Betties of weeks past had some questions for those who chose to send them packing.

And you’d best believe Shangela took the opportunity to bring up the now-infamous note from Thorgy that Trixie Mattel hung in her workspace. “I’ve never dragged you like that,” Shangela said, to which Thorgy replied, “I was in my feelings” — as if that was supposed to make it all OK. Frankly, I think Shangela was far too forgiving of someone who simply couldn’t admit to being an antagonist.

Morgan and Aja were also pretty testy about their respective oustings, pushing BenDeLaCreme and BeBe Zahara Benet to defend their decisions. But nothing was more entertaining than watching Milk discover that maybe she’s not as beloved as she likes to think she is. “They’re basically saying I’m an a–hole,” Milk said during a confessional, before (finally!) looking inward and asking, “Am I an a–hole?” (I’m sure there’s a joke in there somewhere about Milk crying over spilled tea, but I’m not sure it’s worth the brain power at this point.) 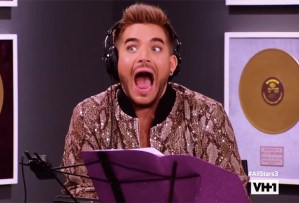 With all that drama (which Ben was “not here for!”) behind them, the two teams met with Adam Lambert to record their girl group numbers. And despite a few bumps along the way, like when Trixie accused Adam of gender stereotyping just because he wanted her to sing in a higher register, the recording session was a success.

Following the performances — which were both jams, on par with Season 9’s Kardashian musical — Ru declared Team All Stars the winner, awarding top honors to Ben and BeBe. But instead of simply having the authority to eliminate a fellow queen, the lip-sync victor would also have to choose which of the eliminated contestants should be brought back for a second chance.

Kennedy Davenport put it best when she called the twist a “crock of s–t. It’s not fair, and it’s not right.” And Ben echoed her sentiments, saying that the idea “makes zero sense.” Alas, we don’t make the Rules, so Ben faced off against BeBe on the main stage in a super snoozy performance (from them both) of Deborah Cox’s timeless “Nobody’s Supposed to Be Here.”

Ben — who won, again — chose to bring back Morgan because she “didn’t have as much of an opportunity” to compete, having been eliminated first. As for this week’s elimination, Ben chose to chop… herself. Calling it the “easiest” choice she’s had to make all season, Ben told Ru, “I am so, so grateful for my time here, both on the last season and this season. I hope you don’t see this as a sign of disrespect, because I see myself as such a Drag Race success story.”

Is your mind blown by Ben’s rash decision? Vote for your personal picks below, then drop a comment with more of your thoughts.