What I’m going to say here may be a bit controversial, but hear me out:

As ridiculous (and monotonous) as the plot machinations were that led to the back half of this week’s Arrow episode, I was kinda glued to the screen from the moment that Thea found Quentin at the cabin, on.

Don’t get me wrong, I was yelling at the TV a bit when the war of words inside the NTA bunker escalated into gas grenades exploding and arrows being jutted at throats. But that absurd sequence of events did what it needed to do — set the stage for the OTA vs. NTA throw-down we perhaps didn’t know we craved.

Opening the hour, Oliver awaited the ransom money from the late (killed “by an inmate”) Cayden James’ account in Corto Maltese, only to learn that the funds had been drained. One quick Felicity hack later, Oliver and Dinah eyeball video of Laurel strutting out of said bank. Dinah is rarin’ to silence the bad bird once and for all, but Oliver won’t allow it. Dinah wonders aloud if he has the stones to back up his threat.

OTA and NTA then each went about tracking Laurel, who we see is being tended to by Quentin at a remote cabin. (Laurel question his theory that there’s a part of his daughter in her, but he trots out evidence to the contrary. For good measure, he then steps up as a shrink to suggest that abandonment/daddy issues led to her despicable ways. Nice Zoom mention, Hoss!)

Though each team gets leads using improbable tech (I could not tell you what Curtis’ Earth-Two-based gizmo was theoretically doing!), they come up empty. Along the way, OTA storms the NTA bunker to see if they’ve got Laurel hidden away there. That boorish scene served mainly to escalate tensions to the point of fisticuffs, and in turn allow Rene to plant a bug on Oliver. That way, when Thea later called Oliver from Quentin’s cabin with the 411 on Laurel, NTA knew to tail their frenemies to the location — even if to fully do that meant Curtis hacking into Diggle’s chip, thus causing him pain. 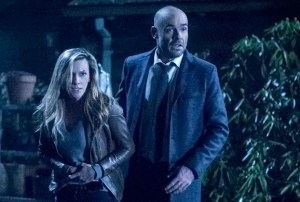 OTA’s plan was to meet Laurel’s demands — “asylum” in another country, at which point she would turn over the cash they believe her to have. And “insane” Quentin (as Thea rightly put it) offers to stay with Laurel until she decides she doesn’t need him. Alas, NTA storms the scene just as they’re ready to send Laurel away, and a fight ensues. Dinah took on impaired Diggle, while Oliver alternately fought Curtis’ spheres and then Rene. Rene blew up Quentin’s car at one point, leaving the Lances to scurry down the road together. But Dinah caught up to them, promptly KOing Quentin. Curtis arrived on the scene to talk his team mate from killing Laurel, as it would not serve justice but serve up more violence/death. When Rene requires emergency Hoss-pitalization (his months-old bullet wound opened back up), everyone disbands, with Laurel in the wind.

Later, after Oliver renders his opinion that MIA Laurel will not come up with the $70 million, Dig and Felicity try to visit Rene in the hospital — only to be very rudely turned away by Dinah and Curtis: “The three of us are done with the three of you, period, forever!” (Oy, here we go again!) Oliver then is left to tell the city reps that the money has not been found, and as such he has failed Star City. Afterward, we see that both Captain Hill and D.A. Armand are on Ricardo Diaz’s payroll. Zzzzz.

The episode ended with a bleeding and delirious Laurel stumbling up to a trucker outside some sort of facility, to say, “I think I was kidnapped from here two years ago….” Wha?

What did you think of the episode”Collision Course”?