Monday’s Night 1 of The Voice’s Season 14 Blind Auditions suggested to me three things: 1. Kelly Clarkson is gonna be a hoot and a half on the coaching panel. She’s the perfect “kid sister” to Adam Levine and Blake Shelton. 2. For us, the Block is mainly just inspired silliness, especially considering all the Steals that are coming up. For contestants, however, as reader Joseph Escote pointed out, it could be disastrous, as it could prevent them from being snagged by the coach whose team they most wanted to be on/with whom they’d be the best match. 3. Even when the performances during any given episode don’t knock you out of your seat, this show goes down as easy as a glass of Malbec after a long day. That said, did any of the performances from Night 2 threaten to dislodge us from our couches with their tremendousness? Read on…

Davison (Team Adam), “To Love Somebody” — Grade: C+ | This 23-year-old Little Rock native, who amusingly didn’t know the difference between the Pledge of Allegiance and the National Anthem, sang with a whole lotta soul but not enough polish to justify his singular moniker. I agreed with (I believe it was) Kelly, who suggested that he sounded like he could be recorded on vinyl. However, if anybody was gonna buy that record, he was going to need to get his vocals under control. I suspect he’ll be a casualty of the Battles. 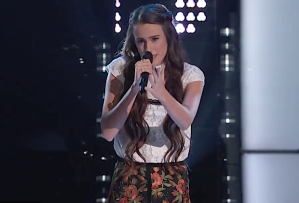 Jaclyn Lovey (Team Alicia), “Can’t Help Falling in Love” — Grade: A | This small-town 16-year-old explained before her Blind Audition that she was often described as an old soul, and the minute she opened her mouth to sing, you could hear why. She has a voice that’s absolutely out of time — beautiful and unique.  (The closest comparison I can think to make is the Cowboy Junkies.) Her vibe was so magical, Blake insisted that she’d made him imagine himself riding a unicorn. Utterly dazzling.

Molly Stevens (Team Kelly), “Heavenly Day” — Grade: B+ | This Georgia native, who’d struggled growing up gay as a Southern Baptist, came off as sweet as rhubarb pie in her pre-performance introduction. And on stage, she sang with a great, gravelly voice that I don’t think you’d mistake for anyone else’s. Not a flawless Patty Griffin cover, but in a weird way, the passionate imperfection here and there only enhanced the feeling that you were hearing something genuine. I dug it.

Dylan Hartigan (Team Kelly), “Danny’s Song” — Grade: C+ | This 21-year-old child actor-turned-boy bander-turned-folk-rocker has Tiger Beat looks and a pretty-enough voice but phrasing that at times was so loose, I hesitate to call it phrasing. Also, I don’t see it working out tremendously well for him that he’s pursuing a genre that hinges on musical authenticity while still going through the motions on stage that he might’ve while he was in his boy band. One Battle and done, I’d wager. 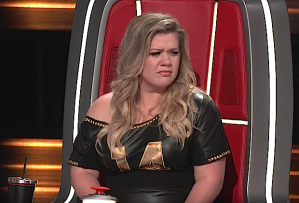 Pryor Baird (Team Blake), “I Don’t Need No Doctor” — Grade: A | Holy moly — somebody had barbed wire for breakfast! This 35-year-old from a “little bitty” California town gave me a sore throat just listening to him — which, to be clear, I mean as a compliment. The guitar hero kicked rasp from start to finish, earning a four-chair turn from the coaches and some special admiration from Kelly. (“You look like a man… a sexy man!”) Alicia even threw some subtle shade at the new coach on the block in hopes of recruiting Pryor for her team. (Kelly’s reaction: pictured.)

So, who do you think gave the night’s best performance? Vote in the poll below, then hit the comments with your critiques.