While much of the world was still asleep, the 2018 Winter Olympics concluded Sunday with one heck of a wrap party from PyeongChang’s Olympic Stadium.

An edited version of the closing ceremony will air tonight on NBC (8/7c), complete with commentary and context from Tara Lipinski, Johnny Weir and Terry Gannon. But if you’re curious about what to expect from the Olympics’ grand finale, we watched the live feed at NBCOlympics.com this morning to see the two-hour proceedings in all their trippy glory.

A few highlights from the event:

* Before the speeches and literal torch-passing took place, PyeongChang’s closing ceremony was much like its opening ceremony: colorful, well-choreographed and a little bit weird — in the best way! First, a gaggle of roller skaters appeared center stage, pantomiming different Olympic sports as psychedelic colors and shapes appeared on the floor beneath them.

Then, after a lovely performance of the South Korean national anthem — with an assist from an adorable children’s choir — we were treated to the most atypical rock concert of all time, featuring a few string instruments I didn’t even know existed.

* The Olympic athletes who remained in South Korea for the duration of the Games then took a victory lap. And just in case these men and women hadn’t already showcased their physical prowess in the last two weeks, some of them walked into the stadium with moves like these: 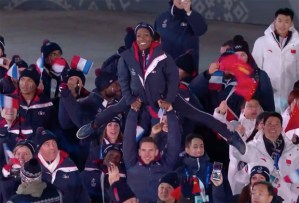 * Once the Olympic flag had been passed to Beijing — where the 2022 Games will be hosted — Thomas Bach, president of the International Olympic Committee, wrapped up the South Korean events with this adorable farewell: “Thank you, and bye-bye, Korea!”

* After performers from China presented a visually stunning teaser of what’s to come in Beijing, complete with sparkly pandas, the closing ceremony ended as any good event does: with a performance from K-pop boy band EXO. (There are so many members! I thought the unspoken boy band rule was to cap it at five!) And then it was time for a massive dance party on the stadium floor, as we were treated to one last fireworks display.

That’s a wrap on the 2018 Winter Olympics! What were your favorite moments? Thoughts on the closing ceremony? Drop a comment below and weigh in!