CBS crowned its first Celebrity Big Brother winner on Sunday in a two-hour event that also reunited the final five houseguests with those they helped to evict.

Ross Mathews was the favorite to win going into the finale — at least according to TVLine’s totally accurate, totally official polling system — so no one was surprised when he scored the first victory of the night, becoming the new Head of Household. But like most things on Big Brother, Ross’ new title came with a price: He had to promise not to evict Mark McGrath, who basically handed him the HOH title by dropping out of the competition early. 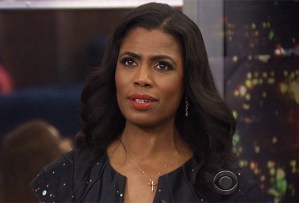 His attempt at discretion was immediately thwarted by Omarosa — of course she can read lips! — but Ross got his revenge when he put her up for eviction against Ariadna, with whom he secretly formed a final-two alliance. In true Ross form, it was almost impossible to keep track of what he was promising throughout the night.

Omarosa’s fate was sealed when Ross also won the veto competition and (surprise!) chose not to swap anyone out. But Omarosa isn’t one to get evicted quietly, so she made a passionate plea to her fellow houseguests, explaining that a win for Omarosa is a win for America. And for… God, I think? Either way, I got chills when she dropped this little prophecy on Ariadna before saying her goodbyes: “Destiny delayed is not destiny denied,” adding that Ari will get her crown someday. (Somewhere, Steve Harvey’s mustache is twitching nervously.)

The remaining four houseguests faced off in a heated game of “Hash It Out,” which gave some of their fellow evictees a chance to display their (terrible) fake texting skills, and gave viewers the unexpected gift of watching Marissa Jaret Winokur completely lose her mind on live television:

Fortunately, Marissa’s panic paid off in the end, as her victory gave her the power to send two more players home. With tears in her eyes, she confirmed everyone’s suspicions by announcing that Ross would be joining her in the final two.

Apologies were given (mostly to Shannon), tears were shed (mostly by Marissa) and Ross reminded us, for the millionth time, that he was in the audience at the first-ever season of regular Big Brother. Some of the evictees seemed genuinely moved by the finalists’ speeches, with James revealing that he changed his original vote after hearing what they each had to say.

Did the Celebrity Big Brother finale end the way you expected? Drop a comment with your thoughts on the winner below.