And then there were five.

At the beginning of the evening, host Julie Chen noted that “there are more alliances in the house than there are days left in the game,” and it wasn’t long before the celebrities started to figure that out for themselves. With herself and Ariadna Gutiérrez on the chopping block, Brandi Glanville pointed a suspicious finger at Ross Mathews, who she accused of forming too many conflicting alliances. “It’s beginning to feel like there’s no loyalty here,” Brandi said — and if there’s anyone who can sniff out a traitor, it’s one of the Real Housewives of Beverly Hills.

And things only got worse as word began to spread that Brandi was the real target, not Ariadna. James Maslow straight-up told Ari that she’s safe because she’s “easier to be around” than Brandi. The former Big Time Rush singer later clashed with Brandi directly, telling her, “I’m excited to send you home because you’ve treated me with more rudeness than anyone else here.” She tried to argue that he shouldn’t vote for her because she saved him twice, but he wasn’t hearing any of it. 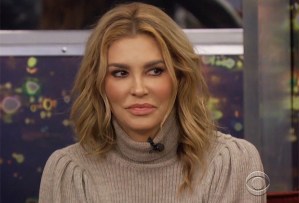 Fully overcome with paranoia, Brandi then set her sights on Marissa Jaret Winokur, accusing her of lying and scheming with the boys behind her back. (Never has “you do you” packed such an icy punch.) This was apparently the straw that broke the ladies’ alliance, with Marissa declaring, “Brandi went so crazy, there’s no saving her now.”

Ariadna finished Friday’s first veto challenge in the shortest time, giving her the power to remove herself from the chopping block. “I’m 90 percent sure my experience in the Big Brother house is over,” Brandi admitted, acknowledging that her only hope was for the house to vote for a bigger threat like Omarosa (who, by the way, propositioned Ross for a new final-two alliance by asking him, “Are your knives sharpened?” Yikes.)

Much to the surprise of absolutely no one, Ari chose to remove herself from the chopping block and was replaced by Marissa. And while Brandi remained confident that her “secret weapon” (aka her mouth) could still “get things done,” she was proven wrong. Here’s how the votes shook out: Omarosa, Ross (reluctantly) and James (“with great pleasure”) voted to evict her. Only Ari cast a vote for Marissa.

The second part of Friday’s two-hour event kicked off with a Head of Household challenge, from which Omarosa emerged victorious — much to the (visible) dismay of Ross and Marissa, who both ended up on the chopping block per Lady O’s whim. Ross was able to save himself by winning the subsequent veto challenge, choosing to use it on — gasp! — himself.

OK, that wasn’t really a surprise, but Omarosa choosing to replace Ross with James? I have to admit, I didn’t see her turning on him like that — though I probably should have, considering there are literally Bible verses documenting Omarosa’s treachery. 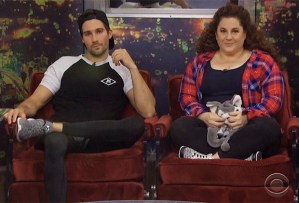 Here’s how the second round of votes turned out: Ariadna and Ross voted to evict James, while Mark voted for Marissa. And judging by James’ casual, not-ready-for-an-exit-interview ensemble, it’s pretty clear that he was not expecting to be sent home tonight.

“I wasn’t going to make it easy on them,” James told Julie after getting the boot. “I avoided winning for as long as I could, but I tried to win today and planned on winning moving forward. … I think I went wrong by not really committing to the deal with Omarosa. If I had her trust a little bit more … she probably wouldn’t have put me up right now.”

Unsurprisingly, James told Julie that he doesn’t plan on dating Brandi after leaving the Celebrity Big Brother house, though he admitted he might have been interested in her if he’d met her drunk at a club. Isn’t that just the most romantic thing you’ve ever heard?

* “Coming up next, Brandi spirals out of control!” could be an announcement made at the beginning of any episode of any reality show Brandi has been on.

* Brandi’s blunt honesty may come across as rudeness, but was she wrong about James? It is hard to like him when he acts cocky. And if, as he says, she hasn’t even seen him at his cockiest, I’m even more inclined to side with Brandi.

* Brandi is also responsible for delivering my favorite response of the night: After listening to Omarosa brag about getting her bachelor, graduate and doctorate degrees in communications, Brandi replied, “Isn’t that, like, the easiest thing to go through in college?” [Insert slow clap here.]

Which two (2) celebrities would you have voted out tonight? Cast your votes below, then drop a comment with your reaction to the latest evictions.