There are as many arguments against The Walking Dead killing off Carl as there are walkers. Chandler Riggs is one of the AMC drama’s only remaining original cast members, and every time another is cut, viewer engagement is diminished. Carl is beyond popular; since viewers have watched him grow over eight seasons from a cute little kid to a brave young man, he’s downright beloved. The series is carrying a lot of, ahem, dead weight that could and probably should be axed before Carl’s head ever found itself anywhere near the chopping block. And the list goes on. But if you ask me, the most compelling reason that the teen should have been spared is that his passing will leave fans not merely sad but hopeless. 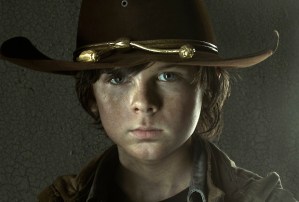 Think about it. What is Carl in the microcosm of the show but the face of the future? You could say that no, Judith is the future, or Maggie and Glenn’s baby is the future. And, in a way, you’d be right. But from Season 1, Episode 1, Carl has been The Future with a capital T and a capital F. He was the character who had to be protected at all costs and, if he wasn’t, then saved, whether he’d been accidentally shot (Season 2), targeted for rape (Season 4) or besieged by walkers (pretty much every season). If need be, Sophia could be zombified, but not Carl — he had to be OK. Always. Hence, our investment in his survival is exponentially greater than our concern over Judith, adorable as Lil’ Ass-Kicker is, Maggie’s baby or pretty much anyone.

Had The Walking Dead not already remained true to Robert Kirkman’s comic-book series by beginning Season 7 with the offing of Glenn, another major root-for protagonist played by an original cast member (Steven Yeun), it might have gotten away with veering from its source material by dispatching Carl. Since their Season 2 coupling, Glenn and Maggie had been carefully positioned as beacons of hope — if they were OK, we could tell ourselves maybe everything would be OK. But once Negan struck out Glenn, the burden of our faint optimism fell squarely on Carl’s shoulders. For us to believe that there could still be light at the end of the tunnel, a tolerable ever after, we needed him to be around to see it. By bumping off that stand-in for our sons and little brothers and the next generation, the show isn’t just suggesting that we hope less, it’s all but instructing us to be hopeless. And, in 2018, do any of us need more reasons to feel that way?

What do you think? Is TWD making a mistake by killing Carl? Or is there another character whose loss would hurt more? Vote in the poll below, then hit the comments.