With the ghost of Chuck Liddell still haunting the Celebrity Big Brother house, a second player was evicted live on Monday.

The night began calmly enough, with Omarosa assuring Ross Mathews that she wasn’t upset with him for nominating her to go up against Keshia Knight Pulliam, telling him that her totally-not-fake trip to the hospital helped her realize that there are “bigger things” going on in the world than this game. (Um, this is news to me!)

But in true Big Brother fashion, it took about five minutes for everything to spiral into a damn pit of chaos. Ross’ overwhelming paranoia yielded a new plan to backdoor Shannon Elizabeth, for which he enlisted the likes of Mark McGrath and even Marissa Jaret Winokur.

“I really thought that we would make it to end together,” Marissa said of Shannon (her Scary Movie co-star, as if that means nothing!) “I can’t believe I’m actually saying this, but I want to backdoor Shannon.” Following a live game of “Now You Sea It,” Marissa emerged victorious — but did not use her veto power to change Ross’ original choices. (Gasps abounded. At least in my apartment.)

Come voting time, Keshia made an emotional plea to her housemates, begging to be sent back to her infant daughter. (“Please use whatever ounce of compassion you have to send me home.”) She also let it slip to James Maslow that she’d previously been doing Shannon’s “dirty work.” Omarosa — shockingly! — urged the housemates to grant Keshia’s request.

And she got her wish, with everyone voting to send her home (7–0).

* As always, everything Omarosa says about her time in the White House is terrifying. This week, it was all about the possibility of a President Mike Pence: “As bad as Trump is, you’d be worried about Pence,” she said. “We would be begging for the days of Trump back if Pence became president. He thinks Jesus is telling him to say things. I’m like, ‘Jesus isn’t saying that.’ It’s scary.”

* Everything Metta World Peace said in the hot tub was incredible, but especially him referring to these flamingos as ducks: 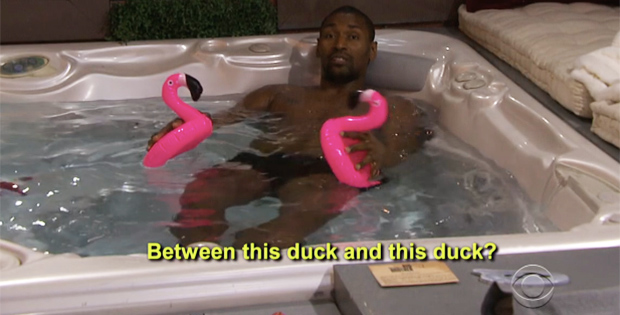 Obviously Pulliam wanted to go, but who would you have evicted? Vote for your eviction of choice below, then drop a comment with your thoughts on the competition thus far.