Showtime on Sunday introduced Our Cartoon President, which puts our current POTUS at the center of his own workplace comedy. The Trump caricature, spun-off from The Late Show With Stephen Colbert, is joined by a supporting “cast” comprised of his most-trusted advisers (sons Eric and Donald Jr.), his closest allies (Speaker of the House Paul Ryan and goblin-esque Attorney General Jeff Sessions) and whatever the heck Ted Cruz is supposed to be. Much of what’s shown in the premiere isn’t too far off from (alleged) reality: Trump begins his day flipping through channels and sipping a Diet Coke, interrupts important meetings to give his daily recap of the 2016 election, and battles Chief of Staff John Kelly, who refuses to let him get his grubby little paws on the nuclear football. 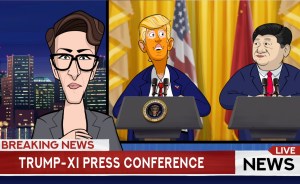 As to be expected, Fox News is heavily lampooned. Fox & Friends gets its very own theme song (“Three white people on a couch / It’s Fox & Friends!”), while Sean Hannity’s animated counterpart insists that Russia itself doesn’t exist, and that all liberals should be drowned. The Democrats are jabbed as well, though the jokes are far more tame. For instance, during a meeting with Chuck Schumer and Nancy Pelosi, Trump asks, “Who’s in charge of your party? Right now it seems like a bunch of seagulls fighting over a potato chip.” In Episode 2, MSNBC’s Rachel Maddow gets mocked for her convoluted delivery of even the most basic news story. The show also has some fun with the recent NFL controversy. Trump fantasizes about Colin Kaepernick kneeling out of respect for a job well done at the State of the Union, while a subsequent SOTU-related nightmare features the quarterback proposing to Melania.

The inaugural episode, which was initially released online ahead of Trump’s real State of the Union address, deals with the lead-up to 45’s big speech. The B-plot finds Donald disappointing Melania on their anniversary (she gets stuck having dinner with Karen Pence), and making up for it by naming her the new national bird. Interestingly enough, alleged mistress Stormy Daniels is only referenced after the marrieds have made up. 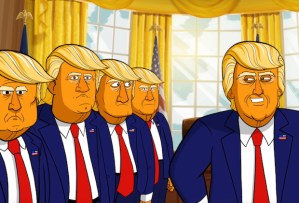 In Episode 2, POTUS hires a team of impersonators — including Eric — to fill in for him so he can avoid comforting disaster victims. (Donny agrees to make one trip for himself, but only after being assured that the victims are all white.) A training montage features the fill-ins declaring non-Norwegian countries “s—tholes,” eating a 24-piece meal from KFC and riding up an escalator in record time. The plan ultimately falls apart when the impersonators get too good at their job and Trump’s approval rating “skyrockets” to 40 percent. In response, he orders National Security Adviser H.R. McMaster to have them all killed via drone strike, then returns to dinner with his family.

Before we go ahead and ask you to weigh in on the Cartoon President premiere, what follows are some of our favorite jokes…

* Mike Pence says that he couldn’t attend a Joel Osteen event with Karen and her fellow “Christettes” because “my impure thoughts for an audiobook narrator forced me to take shelter in the arms of God for the evening.”

* Trump interrupts a meeting to ask Sarah Huckabee Sanders a very important question: “What happened at the end of today’s Fox & Friends? I only caught the first 170 minutes.” 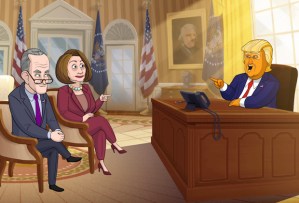 * In an attempt to butter up Trump, Schumer and Pelosi start listing off random words associated with New York. POTUS gets a little too excited and chimes in with an unfortunate throwback: “Central Park… Five!”

* Jared goes to fetch Ivanka before the SOTU address, interrupting her conversation with Melania: “Come on, babe. We have to go. We can chit-chat when we’re all in prison.”

* Trump makes a promise to the American people during his speech: “During Sweeps Week, get your passports ready, because we’re taking the whole country to Hawaii!”

* Melania at one point describes an average afternoon in the White House, which includes “some crying, then lunch, then more crying, then Ellen.”

What did you think of Our Cartoon President? Grade the back-to-back episode premiere via the following poll, then hit the comments to flesh out your thoughts.