There was no way that Annalise Keating could have known, back when she was first sent to court-mandated therapy sessions, that the very person who was supposed to help put her life back together would ultimately blow it up.

There was no way she could have known, when she first stepped foot in Isaac Roa’s office, that she would one day find herself almost kissing her therapist… and then having a vicious fight with him just moments later.

But anything goes on How to Get Away With Murder, and Thursday’s episode proved that Annalise and Isaac’s relationship is one of the ABC drama’s messiest. Here’s what went down in the eventful hour:

“STELLA!” | In the episode’s opening scene, we discover that Isaac was high last week, when Annalise visited his apartment and tried to console him after a disastrous appearance at Laurel’s custody hearing. Immediately after the hearing, Isaac had stopped at a food truck to order a cheeseburger and fries — and he specified that the food be “wrapped in foil,” which was code to get drugs. Upon getting home, he tearfully emptied the food bag and found a packet of white pills, which he crushed up and snorted before falling asleep.

Isaac eventually reveals to Annalise that he’d gotten high — with an opioid called K-Pex, specifically — and she instantly swoops in to save Isaac from himself. The two of them kick off this lovely, episode-long morning routine that involves buying each other breakfast and swapping war stories about their experiences with drug and alcohol abuse. It’s sweet! It’s comfortable! It’s too good to be true, of course: Later, after consulting with Bonnie about the D.A.’s investigation into Isaac, Annalise discovers that Stella Roa had K-Pex in her system on the night she died — the same drug Isaac got high with after Laurel’s hearing.

Annalise finally confronts Isaac about Stella’s suicide, and Isaac reveals everything to her. Even though he’d originally told Annalise that he’d been clean for 23 years, he had actually still been getting high as recently as three years ago, when Stella died. Isaac came home one night to find an empty bag on the floor, which once contained Isaac’s K-Pex — but upon bursting into the bathroom, he discovered that Stella had found and taken all of the drugs, leading to her overdose and eventual death. Isaac tried to resuscitate her (which contributed to those 15 minutes between finding her body and calling the police), but he also staged the scene so that his wife Jacqueline wouldn’t discover that Stella’s death had been his fault. He cleaned up the pill packet, used Stella’s phone to text Jacqueline a suicide note, then placed Stella’s phone in her hand before calling the cops. 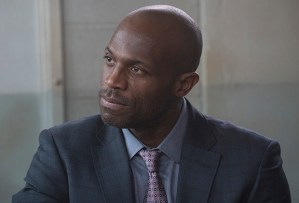 When the A.D.A. threatens to charge Isaac with death by delivery and possibly murder, Bonnie goes to D.A. Denver’s office and reveals that she’s been recording all of their conversations, ultimately blackmailing him into dropping the Isaac investigation — and he does. Relieved that Isaac is no longer an official person of interest, Annalise goes to his apartment to tell him the good news, and that’s when Isaac tries to kiss her. But just before their lips meet, Annalise pulls back. “You’re high,” she says, incredulous… and Isaac flips his lid, accusing Annalise of being the reason his life in shambles right now. He calls her a narcissist and tells her that everyone in her life enables her; Annalise, in turn, calls Jacqueline and tells her that Isaac has relapsed. “Ask him about Stella,” she tells Isaac’s ex-wife, before hanging up and rushing out of his apartment.

PARENT TRAP | After digging through Laurel’s mother’s phone records, Frank discovers that Sandrine had been calling Jorge every day that week, indicating that they must be working together to keep Laurel away from her baby. But when Laurel finally scores her first visitation with her son (who she names Christopher, after Wes a.k.a. Christoph), her mother is at the hospital, and her father is not — a result of Sandrine calling Jorge every day and begging him to let Laurel meet her son on her own.

So, perhaps Laurel’s mother isn’t as two-faced as she seems. But Frank is still suspicious of Sandrine’s meeting with Wes, and he ends the hour by confronting Laurel’s mother on the street about her rendezvous with Wes all those months ago. (The only response we get, for now, is a steely glare on Sandrine’s part.)

NOBODY’S GOT NO CLASS (ACTION) | In the scenes when she’s not coming to blows with her therapist/newest enemy, Annalise is busy preparing for her class-action lawsuit’s first day in court. But just as Annalise inhales to deliver her opening remarks to the judge, the attorney general’s office reveals that the lawsuit won’t unfold in court, after all. Rather, the State Supreme Court merely wants Annalise to write a brief detailing why her lawsuit should proceed, and that lone written document will be what decides the fate of Annalise’s months-long endeavor.

In the end, the State Supreme Court is not swayed enough by Annalise’s brief and rules against letting the class-action suit proceed. Nate is crestfallen, and his relationship with his dad reverts back to the ultra-rocky state we found it in last week. Connor, on the other hand, is newly motivated to re-enroll in law school, vowing to take summer courses in order to catch up with his classmates. (And he wants to resume his engagement to Oliver, despite being the one to call off the wedding planning in the first place.)

But Michaela has the boldest idea of all: After getting word that Annalise’s lawsuit was dismissed, she shows up at Annalise’s door, attempting to convince her former professor that she should get the U.S. Supreme Court to hear her case instead of stopping at the state level. And Michaela knows just the right person who can put a national spotlight on Annalise’s lawsuit — Olivia freakin’ Pope! In the episode’s final moments, Annalise enters a lecture hall at DeWitt University, where Olivia is teaching a course fittingly titled “How to Survive a Scandal.” (As though Ms. Pope isn’t still learning how to survive a scandal literally every week.)

OK, your turn! What did you think of Thursday’s Murder? And are you looking forward to the March 1 crossover between HTGAWM and Scandal? Hit the comments below with your thoughts!