Joel McHale has lined up the first guests for his new Netflix series, and the Greendale gang is well represented. 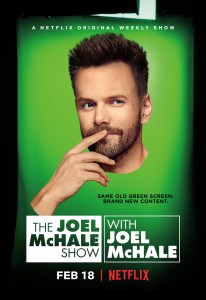 The Joel McHale Show With Joel McHale is being billed as a weekly topical series featuring celebrity guests, comedy sketches and viral videos. So yeah, it’s pretty much The Soup. Newly released key art teases as much, with a tagline that reads, “Same old green screen. Brand new content.” (No word yet if he’ll still be talking about chicks, man.)

Like McHale, Brie and Rash made the leap from Yahoo Screen to Netflix following Community‘s six-season run. Brie currently stars on the ladies wrestling comedy GLOW, while Rash hosts the Stranger Things after-show Beyond Stranger Things. Brie shared what appear to be photos from the pre-taped Greendale reunion on Instagram:

It was death by bananas for @jimrash today. @joelmchale & i gave him other options but bananas he chose so bananas he got. I’ll miss him. #community

Community reunion!! (@jimrash was not harmed in the taking of this photo or previous boomerangs) @joelmchale

Press PLAY on the NSFW teaser above to see McHale back in front of a green screen, then hit the comments and tell us if you’ll be tuning in for the series premiere.