This week on The CW’s Arrow, Cayden James finally learned the truth about who killed his son. But was it too little, too late? Also, what was the outcome of a deadly Canary clash?

In the wake of last week’s events, Cayden James & Co. have mobilized, and given Sobel’s betrayal, the final phase of Arclight gets accelerated — the bomb goes off at midnight. Unless, Oliver can come through on proving who really killed Owen James.

In flashbacks to 18 months ago, we see how Cayden would let his work as an elite hacktivist get in the way of being a good dad, missing Owen’s basketball games and such. But he promises to be there for the quarterfinals. And indeed, Cayden does ignore Alena’s warning about ARGUS closing in so that he can peek in on that big game… only to get nabbed and carted away by agents. Later, while being held in a shipping container, he gets word that Owen was murdered, assailant unknown.

Back in the present, luckily, Alena’s digging into the faked video bears fruit, and they get eyes on the true archer — assassin Karl Iscove, who is long dead. But who hired Karl, and proceeded to dummy the video? When presented by Oliver and Diggle with the real footage, Cayden is able to glean from digital fingerprints that it was the handiwork of someone within his organization — Anatoly, Diaz or Black Siren. Bring those three to me, Cayden says, and I’ll put a pin in obliterating Star City.

Oliver calls in all the troops for this one, sending Rene and Curtis after Diaz. Dinah meanwhile has a head start on hunting down Black Siren, whom she is determined to make pay for Vince’s death: “This ends tonight. You end tonight.” The canaries start going at it when Quentin shows up, though he gets bellowed into the bleachers by Dinah. That’s when Oliver shows to lasso the ladies and postpone, if not put off, their fight to the death. 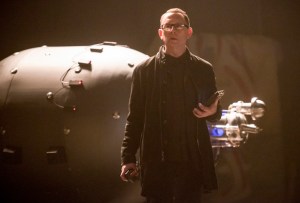 Once Anatoly is also rounded up, Cayden instructs Oliver to deliver all three to an abandoned theater, where he has The Bomb. William, meanwhile, slips away from the bunker, where he grew tired of and anxious from waiting for his dad to return. William shows up at the theater, which if anything perhaps triggers Cayden a bit, as the typically calm and collected mastermind starts orating about his loss and everything. Black Siren interrupts to claim that it was she who ordered Owen’s murder — though Cayden doubts her boast, given how hesitant she was to finish off Vince. Things then go very haywire when the detonator’s proximity and gigahertz waves (or something!) causes Black Siren’s dampening collar to power down, at which instant she knocks everyone down like bowling pins.

Dinah chases Black Siren outside, where they have it out in an alley. Quentin shows up waving his gun, but Dinah takes it from him and uses it to shoot Black Siren — just as Black Siren is letting loose with another sonic cry, toppling Dinah. Quentin rushes to the wounded Black Siren, and with Dinah KO’d, gets an idea…. Back inside the theater, meanwhile, Oliver stops Cayden from triggering the bomb, with an arrow to his wrist.

Regrouping at the bunker, the team laments that all three of Cayden’s associates are “in the wind,” Black Siren presumably included. But as we see later, Quentin has her cuffed up in the back seat of his car. Hearing that she hesitated to kill Vince, he just knows, dammit, that a tiny part of “his girl” is in her, and by any means necessary, he is going to bring it out in her, as they drive away.

Oh, and Team Arrow was reminded: Though they thwarted Cayden’s plan, “this don’t change nothin’, Hoss.”

Oliver visits Cayden, who’s in custody and quite recalcitrant about his behavior. He gives Oliver leads on his associates possible whereabouts, as  well as the info needed to get back the city’s ransom payouts. He asks to visit Owen’s grave before he gets locked up, which Oliver agrees to.

Cayden would visit Owen… though not in such a manner. For shortly after Oliver leaves, Ricardo Diaz sneaks in to gloat that it was he who ordered the hit on Owen, that Cayden is right now far from being the “smartest person in the room,” seeing as he merely set things up so that Star City is “ripe for a takeover” — by someone who has the new SCPD captain and other bigwigs in his pocket. And with that revealed, Diaz fatally stabs Cayden, while asking that he says hello to Owen for him.

What did you think of the episode “The Devil’s Greatest Trick”?