Until now, Black Lightning has focused on the toll that crime and gun violence take on Freeland. Episode 4, titled “Black Jesus,” demonstrated how the effects of drugs on the community are just as dangerous… and just as deadly.

At Garfield High, a student in the bathroom screams in agony. Jefferson enters and sees Bernard, not in pain but unarguably “under the influence.” He tries to calm the student, but the only thing that stops the hopped-up teen is two electric zaps. After Bernard collapses, Jefferson finds drugs in his pocket. Anissa is driving to Garfield when sees two of her students talking to drug dealers. She collects the girls and steps to dealers about the damage they’re causing to their own people, but decides to keep a cool head after one flashes a gun and the other calls her a bitch.

Jefferson tells Gambi about the incident with Bernard and find out that the drug is called Green Light. Gambi says he’ll talk to his contacts, and Jefferson (who knows The 100 is likely responsible) says he’s going to check the streets. To that end, he zaps one of the low-level dealers into giving him a name — Two Bits. 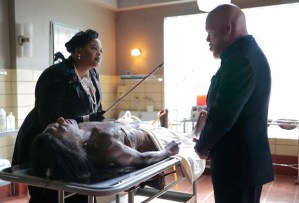 Touching base while she embalms (?) a dead (??) body at her funeral parlor, Lady Eve tells Tobias that his reinvention from failed politician to crime boss is what made her decide to give him The 100. But with Black Lightning’s return, her partners are doubting his ability to lead. “Your entire criminal career was built on the belief that you killed Black Lightning…. It’s like you lied on your resume,” she says.

The next day, Jefferson and Kara meet with Bernard and his father. The college-bound student is in danger of being expelled, so his father asks for a second chance. Jefferson decides not to expel him but needs to know where he got the drugs. Jefferson relays the name — Ronald Wright — to Gambi, who soon discovers that the dealer himself has OD’s on Green Light: “Evidently Mr. Wright didn’t follow the No. 1 rule of being a drug dealer: don’t get high on your own supply.”

Tobias roughs up the M.E. who confirmed Black Lightning’s death nine years ago. The man says the body he saw came out of the river where the superhero “fatally” fell and that his boss put the body in the crematorium. Feeling “owed” a death, Tobias has his henchman secure “payback.”

When Jennifer returns home from visiting Khalil in the hospital, her parents tell her she has too much on her plate and needs to focus on her own life. Jennifer won’t abandon Khalil and offers a solution — she’ll quit track. Later at dinner, the Pierces and Hendersons discuss Black Lightning’s recent activity. Anissa, privately pondering her own powers, supports the resident vigilante. She then leaves dinner early to go beat up the two dealers she berated earlier, but freaks out a bit after and dials 911 to make sure they survived.

Gambi describes Green Light as a mix of crack and PCP, and says that the super-addictive, super-powerful drug has led to 36 overdoses and six deaths. “Black kids OD’ing has never been newsworthy,” Jeff says in response to the lack of media coverage. When Black Lightning pays Jeff’s old friend Two Bits a visit, the dealer coughs up where and when he picks up the product. He then asks for a selfie before getting rightly zapped.

The following day, a school board official tells Jefferson and Kara that the board wants to have final say on punishing students who break the rules, recommending that Bernard be expelled. Jefferson knows that the board’s decision making is flawed because they don’t know the students, but if he doesn’t play along he’ll be removed as principal once the school year ends. Kara agrees that it’s a hard choice, and offers help with anything he needs. (Give it up, Kara.)

That night, Anissa and Grace are approached by some homophobic creeps outside the Ruby Red Lipstick Bar. When one grabs Grace, Anissa goes into superhero mode. Black Lightning, who’s been watching the warehouse that Two Bits told him about, leaves his post to investigate a loud boom and loses sight of the truck he planned to track in the process. He arrives to an empty parking lot, but Gambi — again conspicuously picking and choosing what to share, keeping mum about what the club’s security cam caught — quietly investigates on his own and takes a picture of the scene, where he finds a boot print Anissa left deep into the quaked lot’s pavement.

At Garfield, Kara reports that the school board said Bernard can stay if Jefferson gives up final say on future severe infractions. Jefferson begrudgingly agrees, then later gets a call from Bernard’s dad, saying that the his son went to a drug house to score. Black Lightning storms the drug den, beats on the gang and saves Bernard, who ends up in a treatment facility.

Tobias’ sister Tori is in town to help take out Black Lightning for good, but he says he has to be hand-off since there are warrants out for him. Tori tells him to change the community’s perception of Black Lightning from positive to negative so that they can do the job for him, elaborating that the best way to do this is through Khalil, who currently has Freeland’s unwavering support. Tobias anonymously sends the now-paralyzed teen some gadgets and gifts, pays his medical bills and his mom’s rent. Tobias later visits Khalil and starts planting seeds of doubt in his mind, claiming that Black Lightning is to blame for his paralysis. Tobias says it hurts him to see the star athlete laid up, adding, “If you’d like, I can show you how to kill your pain,” with a menacing look on his face.

What did you think of the episode “Black Jesus”?