In the first episode of Alan Ball’s new HBO drama Here and Now, when a family gathers for the patriarch’s 60th birthday, the adult kids all scramble to bring an unsuspecting guest along with them as a buffer. And it’s completely understandable: After watching four episodes, I want to spend as little time alone with these people as possible, too.

Given the presence of Ball and Oscar winners Tim Robbins and Holly Hunter, Here and Now — debuting this Sunday at 9/8c — should be the next great prestige-TV drama, but instead, it’s a crushing disappointment: an insufferably mopey family drama that’s as dull and meaninglessly vague as its title. Filled with unlikable characters flailing their way through dead-end storylines, Ball’s series lacks a compelling reason to exist; it plays like Transparent without the trans parent… or the keen emotional insight. Most unforgivably, it’s a massive bore, with a whole lot of speechifying and existential navel-gazing adding up to not very much at all. 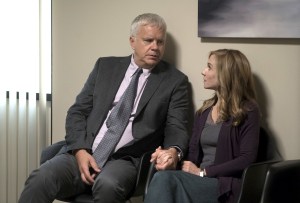 Robbins and Hunter star as Greg and Audrey, aging Portland hippies who’ve raised a family of adopted kids from far-off nations, Angelina Jolie-style. Their kids are grown up now, and all unhappy in their own way: Ramon (Daniel Zovatto) is a hipster video-game designer from Colombia, Ashley (Grey’s Anatomy alum Jerrika Hinton) is a fashion executive from Liberia who doesn’t tell her husband she’s doing cocaine with hot male models, and Duc (Raymond Lee) is a tough-love life coach — sorry, “motivational architect” — from Vietnam who’s hiding a salacious secret. Oh, and Greg and Audrey also have a biological teen daughter: Kristen (13 Reasons Why‘s Sosie Bacon), who catfishes people with fake Facebook profiles because she’s bored.

If you’re still waiting to hear what Here and Now‘s narrative hook is, exactly… yeah, me, too. It’s more or less a portrait of an ultra-rich family fretting about their unsatisfying lives in their beautiful homes. They’re like oblivious yuppies in a Portlandia sketch… except they’re treated with deadly seriousness. Sure, a low-stakes family drama can work beautifully — see: This Is Us, Parenthood — but not when the characters are all jaded, cynical and deeply miserable, as they are here. I just kept asking myself: Why am I watching these people? And why should I care? 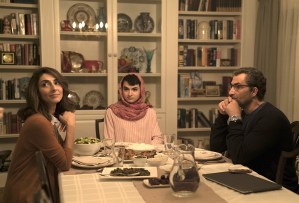 I haven’t even mentioned Ramon’s Muslim therapist (Peter Macdissi), with a gender-fluid teen son at home who wears a hijab. And then there’s the giant, orange-skinned elephant in the room: Here and Now is pretty explicitly set after the election of President Trump, and is saturated with rage and frustration at the current state of our country. It also attempts to tackle an overwhelming array of social issues all at once, from LGBT acceptance to racial bias to abortion to mental illness… but it feels less like proper representation and more like checking off boxes. Ball bites off way more than he can chew here, storytelling-wise, and so little of it actually resonates.

There is one potentially interesting plot wrinkle here — Ramon goes through a personal crisis that I’m not allowed to spoil — but honestly, even that doesn’t add much to the story. That subplot’s spacey, metaphysical inquiry sits uneasily alongside the dysfunctional-family melodrama and latte-liberal comedy; it’s an ungainly blend that never quite comes together. Here and Now lunges towards humor at times, with clumsy swipes at white privilege and political correctness, but it’s never clear if we should be laughing at this family or with them when they say things like “There’s a reason why ‘misogyny’ is spelled with two Y’s.” There are also a lot of explicit sex scenes, for no apparent reason other than it airs on HBO. 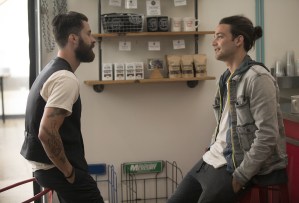 I would like to see more of Zovatto: He has a filthy-haired charm as Ramon, and his sweet romance with a bearded barista (Andy Bean) at least offers a glimmer of authentic emotion amid all the complaining. But that thin sliver of story can’t redeem the rest of Here and Now. I’d like to believe this show might find its footing as the season progresses — but really, in this Peak TV age, shouldn’t four episodes be more than enough? There’s so much competition out there these days, TV shows need to grab us in the first hour or two, at least, and Here and Now never makes a strong case for our attention.

Ball is a rightfully celebrated writer from his years on Six Feet Under and True Blood, and he clearly has something urgent to say about living in a post-Trump America. But what is that, exactly? Whatever it is, it’s lost in all the vitriol spilling out in every direction. (This show’s worldview is an off-puttingly negative one: caustic, misanthropic and suspicious of technology.) Here and Now feels like a rough draft for a TV show that never got refined into a coherent premise. I’ve sat through four hours of it, and I still don’t quite know what it is… other than not worth your time.

THE TVLINE BOTTOM LINE: HBO’s Here and Now is a muddled, unpleasant family drama that has too much to say and not enough to keep you watching.