Most people would balk at being the other woman. But not Will & Grace’s Jack. As his one-month anniversary with Drew approached in Thursday’s episode, he declared, “There’s nothing better than being with a closeted married man!” But was that true, even for him? Or was he merely perpetuating what Will called “an ancient gay cliche” by pursuing unavailable guys? Read on for the answer — and to find out how Grace fared when she got a shot at peddling her new line of bedding on QVC.

‘HAVE YOU BEEN WATCHING VIDEOS OF GIRLS BURNING OFF THEIR BANGS WITH FLATIRONS?’ | Early on in the episode, Will was surprised to learn that Jack was still seeing the married cop who, behind their pal’s back, Grace and her roomie called his “Staten Island Fairy” (also the installment’s title). But in Jack’s mind, their affair was the perfect arrangement: no strings attached, no pesky questions like “What’s your middle name?” or “What’s your name?” And Angela didn’t suspect a thing: She thought Jack was straight and married to Karen. When Will suggested that Jack was just avoiding commitment, the player insisted, “I have asked plenty of men to put a ring on it… just not on my finger.”

Just then, Grace and Karen burst in with amazing news: “Grace got an STD!” Karen announced. No, actually, Grace had gotten a chance to pimp the partners’ linens on QVC. Slight, if only slight, difference. And she knew the perfect person to represent their product: her! Oddly enough, he, too, knew the perfect person to represent their product: him! Especially since she was’t famous for thinking fast on her feet. She’d even been kicked out of the She-nanigans, her college improv group. In the end, Grace pulled rank and said she’d look over his binder full of market research. But I think we all, and even he, knew how this fight was going to end. 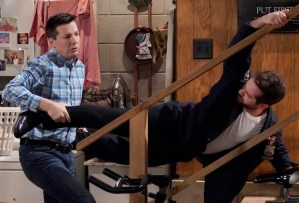 ‘I LOVE WHEN GAY GUYS CALL EACH OTHER SHE’ | Meanwhile, it appeared that the honeymoon was still very much on for Jack and Drew. The latter was enthusiastically embracing his gayhood and looking forward to getting his first pair of assless chaps. Wha… ? “All chaps are assless,” Jack explained. “That’s why they’re awesome.” On the downside, Drew was starting to feel bad about keeping their fling a secret from Angela, who thought all they were doing in the basement was watching hockey. When he started considering coming out to his wife, Jack argued strenuously against it. “Don’t you want to be vice-president someday?” he asked. Later, Karen joined the couple downstairs with Angela, and had a flashback to being in a room just like that with her mother, who gave her Southern Comfort to forget seeing Mommy having sex with a man who wasn’t Daddy. Reminded that secrets ruin lives, Karen up and outed Drew. 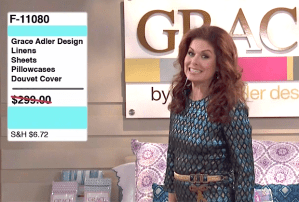 ‘REMEMBER TO SMILE… NOT LIKE THE CLOWN FROM IT’ | Before Grace went on QVC sooner than expected (since Lisa Rinna cancelled, damn her!), Will was full of sound advice, such as, “Don’t say moist; people hate the word moist.” So, of course, once the camera was rolling, she accidentally blurted out, “Do you love your linens? Moist people don’t!” (Somewhere, Lucille Ball had to be nodding her head in approval.) From there, things only got worse. “Could we cut to a commercial?” Will asked the P.A. In response, she reminded him that they were on QVC — they are the commercial! The more Will “guided” Grace in her earpiece, the more stressed out she became. Finally, she removed her earpiece altogether and, desperate, Will joined her on screen. “Apparently, he knows everything about everything,” she told the audience before threatening to “talk sheet.” At last, their segment was “euthanized”… just as viewers started to respond to Will and Grace’s bickering. 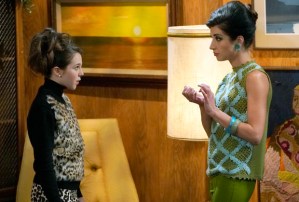 ‘THIS IS ON YOU, LADY!’ | Later, back at the office, Jack told Karen that he was still mad at her, because after she’d outed Drew, Angela had admitted that she’d already suspected he was gay, and wished him well. To make Jack feel better, Karen offered to let him slap her as hard as he could. But she wound up slapping him over and over instead. When Drew came by the office, his gift of a tacky clock gave Karen another flashback, about her mother lying about being happy as she went from man to man. That fresh in her mind, she encouraged Jack, in spite of his homo fomo not to break up with Drew, lest her turn into a lomo (lonely mo). “It’s such a risk” committing to Drew, Jack said. A risk? Drew replied. He’d left his wife! In the end, Jack decided to give Drew a chance. At least an overnight… and maybe brunch… and, if it went well, they’d binge-watch Riverdale. Back at QVC, Will and Grace were horrified to learn that, as they’d fought and made up, the camera had kept rolling. On the plus side, the audience had loved seeing a married couple portrayed so realistically (ha) and had bought up all their bedding.

So, what did you think of the episode? Glad it looks like Drew might stick around awhile? Hit the comments.