If Chicago Fire is going on a month-long hiatus to make way for the Olympics, you better believe it’s going to (temporarily) sign off with an explosive cliffhanger. And that’s just what the NBC drama did during Thursday’s episode, which ended with Casey and Severide leaping off a building roof against a backdrop of flames.

Elsewhere, Stella finally realized that maybe living with the guy she likes while dating someone else isn’t such a good idea, and Brett inadvertently invited her ex Cruz to a spa… but Mouch ending up taking his place! For more on what’s ahead for both romantic storylines, plus the inspiration for that crazy cliffhanger, read on as showrunner Derek Haas tackles our burning questions.

TVLINE | You’ve done life-and-death cliffhangers before, but I don’t think you’ve ever done one quite like this, where it just cut to black mid-action.
I was thinking about how to do a different one than anything we’ve done before, and I was thinking about that Butch and Sundance scene where Robert Redford and Paul Newman run and jump off a cliff as the super posse is closing in on them. I said, “[Casey and Severide are] kind of our Butch and Sundance. I wonder if we could do something like that?” We just got into the writers’ room and talked about a bunch of different scenarios. We wrote it… and we kept going back to that Butch and Sundance idea. When the director of that episode was directing them, he was like, “Oh yeah, we gotta do this similar to the Butch and Sundance thing!” 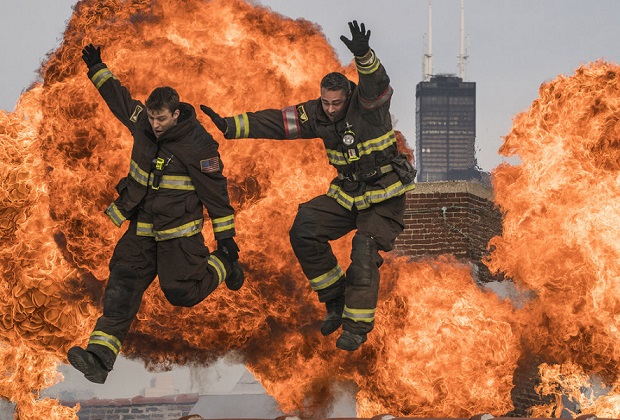 TVLINE | You had to have been pretty pleased when you got those dailies.
It was so fun. Well, actually, the very first I even saw [of it] was when Elizabeth Morris, who’s our awesome set photographer, sent me an email… and it was this picture that I’m sure you’ve seen by now that I thought was photoshopped, with Taylor [Kinney] and Jesse [Spencer] just leaping with these grins on their faces as the fireball is erupting behind them. That was when I first saw it, and I thought, “Oh, my God, this is going to be great!”

TVLINE | How unscathed or not will Severide and Casey come out of this?
There’s going to be some medical ramifications that play into the next episode. So it’s not just a throwaway cliffhanger. They both end up needing some quick rescues themselves.

TVLINE | That was such a nice moment when Casey told Severide that he suggested him for the commendation. Is the tension that’s been festering between them since Casey’s promotion over?
Like any friends, there are always going to be rifts and obstacles to overcome. But they really are great friends. That is pretty much the end for a little while. … I did think that was a really nice sort of twist that you didn’t see coming, that Casey had stepped up for Severide. 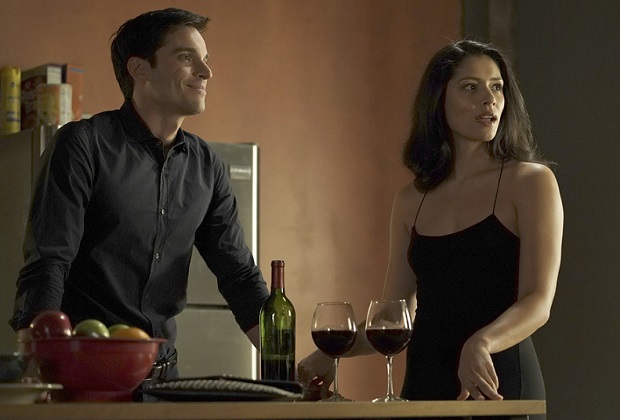 TVLINE | Stella announced to Severide that she’s planning to look for her own apartment. Is that a wake-up call for Severide?
I think that and seeing hazmat Zach in their apartment was a wake-up call for Severide. I do love the chemistry between Stella Kidd and Kelly Severide. But I also love the chemistry, just personally, between Miranda [Rae Mayo] and Taylor. They’re just fun and funny together. So we’re playing off a lot of their own friendship, and then fictionally, we take it into a more romantic direction coming up.

TVLINE | On a different romantic front, Cruz has reignited feelings for Brett, who doesn’t reciprocate. How messy is that going to get?
It’s less messy in terms of a big triangle with clear lines in it. I’d say they’re more dotted lines in this triangle. [Laughs] I think it’s one-way, Cruz towards Brett, and he realizes it. And it definitely rears its head over the next few episodes. But Cruz realizes that more important than the romantic feelings he has is the friendship that he has with her.

TVLINE | So when he didn’t show up for the spa appointment, was that him realizing it was a mistake? Or did he really have a family emergency?
No, that was Otis getting into his head. That was hilarious when Mouch showed up at the spa appointment.

TVLINE | I loved the spa lady’s reaction, like, “Really?”
Hilarious. I knew it was coming, but I wasn’t there on the day that they shot it, and I just waited for the cut to watch it, and I fell off my couch, I was laughing so hard. Because Christian [Stolte] is just hilarious.

TVLINE | There’s so many firefighter shows right now: 9-1-1, the Grey’s Anatomy spinoff Station 19 is coming up. Do you take some pride in helping to reignite that genre?
I don’t know about pride as much as like my competitive spirit goes ratcheting up to 11. I’m like, “We’re going to stomp them! I want ours to be the best. What are they going to do that we haven’t done?” [Laughs] That’s where my mind goes. But I wish them all the best because it’s an incredible profession of brave people, so there should be more of these stories told. I just want ours to be the best one.