Conventional wisdom (and even the occasional network boss) tells us that one of the appeals of rebooting or reviving an old TV properties is that there is built-in awareness. But at the end of the day, do such series actually benefit from that “pre-sold” nature?

Reboots, revivals and spinoffs bring with them a warm familiarity with the title, the basic premise and the character types, which in turn suggests that fewer marketing dollars might be needed to grab eyeballs. But is their success rate any greater than that of TV series that are wholly original? Said differently, if oversimplified: Do reboots get renewed more often?

I broke out my trusty abacus.

Going back five full years, I tallied every freshman series launched during the fall or at any point midseason on ABC, CBS, Fox, NBC and The CW. I split those 217 programs into two buckets — (ostensibly) original concepts, and not — and then broke the latter group into four subsets: Reboots, Revivals, Spinoffs, and Adaptations (of movies, books, foreign series, etc;). Lastly, I took stock of which freshman shows earned at least a Season 2.

Let’s see if I can present it in a handy, clear chart, with details below: 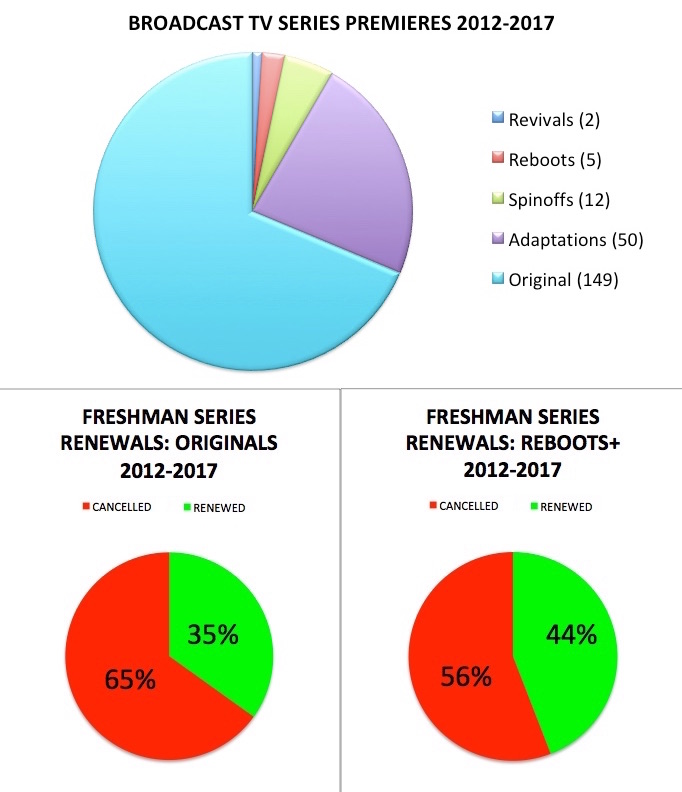 The TV season currently in progress is still too new, too many fates up in the air, to include in any charts. But as of Jan. 31, a handful of the 26 original series (including The Orville and 9-1-1) have earned second seasons, while at least three Reboots+ (Young Sheldon, Star Trek: Discovery and The Gifted) have scored pickups.

Fun fact! Though all of the above deals with broadcast-TV only, when you get into cable and streaming, Revivals, Reboots & Adaptations are nearly bullet-proof, falling shy of a perfect renewal rate. A few of those many examples include Fuller House, Marvel’s Daredevil, One Day at a Time, 12 Monkeys, Outlander, Girl Meets World, Marvel’s Runaways, The Handmaid’s Tale, Fargo, Big Little Lies and The Tick. Again, to name just a few!

Of course, a multitude of factors can steer a new series’ fate, including misguided vs. marvelous marketing, stellar vs. so-so casting, time slot competition and so on. But the charts above at least suggest a greater chance of success by going with a known entity instead of something wonderfully shiny but “frighteningly” new. And in today’s #PeakTV landscape — where in the year 2017 a total of 447 scripted programs were available via broadcast, cable and streaming — any reduced barriers to entry are most welcome.

(Thank you for reading this far, if you did. You are a gentleman and a scholar.)