Question: Regarding your pregnancy blind item, can you please give us one more clue? —Kevin
Ausiello: The show in question airs on… HBO!

Question: Anxiously awaiting the final season of The Americans. Can you share anything about the premiere? —Kathy
Ausiello: Here’s the intel I’ve received so far: The March 28 opener jumps forward three years to 1987, with Philip ditching espionage for a yuppie corporate job (he has a car phone!) and a worn-out Elizabeth picking up the spy-game slack. That work imbalance — and the thawing of the Cold War brought on by Gorbachev — leads to a serious rift in the Jennings’ marriage. Meanwhile, Paige is in college now, and actively assisting her mom as a spy-in-training. And yes, the premiere delivers another moody montage set to a classic ’80s song. 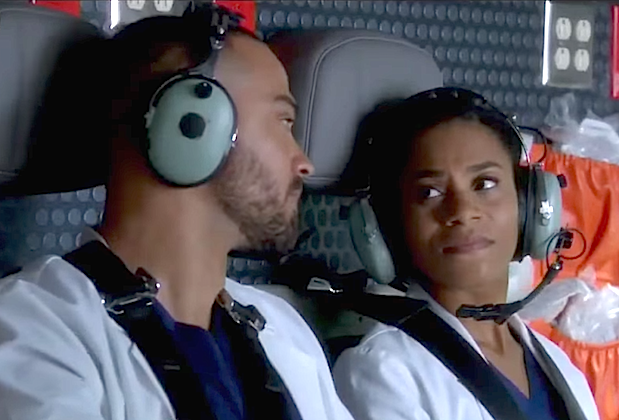 Question: Please tell me Dark April isn’t gonna last long on Grey’s Anatomy. — Jody
Ausiello: I’m afraid it’s likely to get worse for Doc Kepner before it gets better. She still doesn’t know, after all, that her ex Jackson is thisclose to his first date with Maggie. “Once she does become aware,” portrayer Sarah Drew tells TVLine, “I think it’s going to be very hard on her. I can’t imagine it not being difficult!” The last time she and her former husband even discussed their relationship, the actress reminds, “April broke down and said, ‘It’s too hard for me to [live platonically with you].’ She basically gave up being able to be with her child 100 percent of the time because it was too painful to live with the man that she sort of had feelings for.” So yeah, if Jaggie goes forward, this is gonna be rough.

Question: Could you please answer a question for me? I have never seen Grey’s Anatomy, but I am a fan of Jaina Lee Ortiz and intend to watch the spinoff Station 19. I need to know if I will be able to jump right in with the new show or will there be any particular episodes of Grey’s I should watch to know what’s happening? —James
Ausiello: Having seen the spinoff’s premiere episode, I can tell you without hesitation that you don’t even have to know what Grey’s Anatomy is — much less have seen an episode — to understand what’s happening in  Station 19. 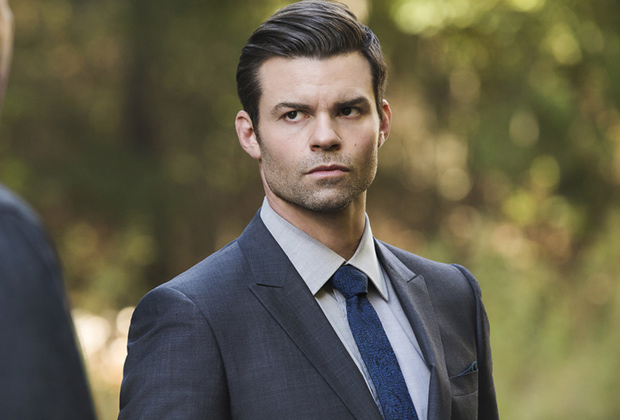 Question: I hear we’re getting a big Elijah episode at the beginning of The Originals Season 5. What can we expect? –Julie
Ausiello: You’re correct, Julie. Episode 503 zeroes in on Elijah’s new life in France, and while Daniel Gillies can’t say too much about what goes down, he confirms that it doesn’t take his character very long to “figure out he’s not a regular person.” (Don’t forget, Marcel wiped his memories at the end of Season 4.) As for the quality of the episode, which was directed by castmate Joseph Morgan, Gillies says, “I think it’s one of the best episodes we’ve ever done. I’m actually amazed that it made it through — it was such a change of pace from what we normally do.”

Question: How much longer will Once Upon a Time make us wait for Henry and Jacinda to get together? —Meredith
Ausiello: In a word, longer. And this is despite Lucy’s brush with death in the midseason finale. “The truthful answer is that I don’t even fully know — I’m a little in the dark on some of this stuff,” Andrew J. West shared with TVLine. “All I can tell you is that when we come back [on Friday, March 2), it’s still going to be pretty fraught with tension between the two of them. There are still issues that have to be overcome.” As for whether Henry himself is finally a True Believer (again), West said, “What we’re starting to see is the dam breaking a bit. But as we’ll see in the episodes to come, there are more hurdles to cross, in terms of getting him all the way ‘there’ to help his family.”

Question: Given how much random sex he has on the job, I’m surprised 9-1-1‘s Buck hasn’t gotten fired yet. Are we going to look into that? –Cheryl
Ausiello: As a matter of fact, Oliver Stark (aka Buck) says that his character’s sexual impulses are “something we definitely get into later in the season.” (They’ve got to come from somewhere, right?) In the coming weeks, though, you can expect Buck to be having considerably less sex, which Stark is “thankful” for. “I’m glad he’s calming down a bit on that front and is learning to have some self control.” Stark credits Buck’s budding relationship with Abby for helping him “mature so quickly from when we met him in Episode 1.” 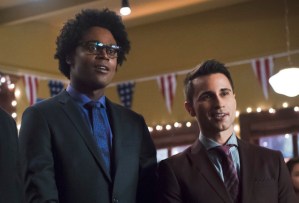 Question: I need some scoop on Arrow‘s Curtis Holt/Mr. Terrific. Might Paul make a reappearance? —Stephanie
Ausiello: “I definitely hope so. I really like Curtis and Paul’s relationship, there’s a lot of love there,” Echo Kellum answers. “But I do feel like Curtis needs to ‘play the field’ in a different sense right now — to kind of do his own thing and find out where he needs to be in life. He’s dealing with too many breakups recently! I definitely want to see him out there making strides in his own world, not necessarily needing someone else.”

Question: How about some Lucifer scoop, pretty please? —Audrey
Ausiello: When Matt Mitovich recently Q&A’d Tom Ellis, the Fox series had just shot an episode “where one of the missions to try and help Cain die involves Lucifer going down to Hell to get the soul of Abel, to try and reverse it all,” Lucifer himself shared. “That’s quite a fun episode.” Speaking of fun times, a Bonus Scoop: Rachael Harris told us that a “blind date episode” is on the horizon, coyly offering no details other than, “It’s pretty awesome.”

Question: I know he’s dead, but does Quinn at least get a shout-out in the Homeland premiere? Maybe even (dare I hope) a flashback? —Nicole
Ausiello: Hate to break the bad news, but the late, great Peter Quinn isn’t mentioned or referenced at all in the Feb. 11 premiere. (I know; I was surprised, too.) Carrie has a new mission — expose the increasingly paranoid President Keane — and her old friend Max pops up in the premiere to lend a hand. So even though showrunner Alex Gansa said that Quinn’s death will “color Carrie’s every thought” this season, the premiere offers no explicit evidence of that. 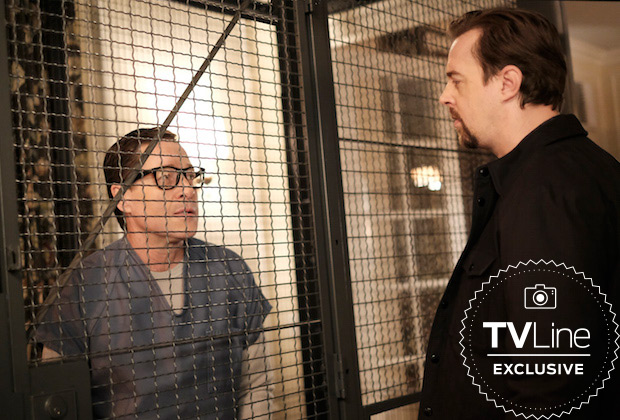 Question: Will we be seeing Delilah again anytime soon on NCIS? –Alex
Ausiello: We should be seeing her on Feb. 27… and yet we won’t, though for a valid reason. In that episode, McGee’s worst nightmare comes true when NCIS strikes a deal with Paul Triff (returning guest star French Stewart), giving the convicted murderer a 48-hour furlough at his former residence — aka McGee’s current home! — in exchange for information that can convict Gabriel Hicks. Having to house a caged-up killer under his own roof, McGee smartly sends Delilah and the twins away (and tries to hide all evidence of the babies).

Question: Now knowing how significant the post Super Bowl This Is Us ep is going to be, I’m very concerned I won’t actually be able to watch it. I live in Philadelphia and regardless of the game outcome I fear the news will show the city celebrating/mourning the results instead of This Is Us. Do you know if NBC has plans to make sure the Philly/Boston areas still get to see the show live? —Fran
Ausiello: An NBC rep assures me that “This Is Us will start after the Super Bowl post-game show in the entire country simutaneously. The local news will come after This Is Us, not before.” (Here’s some handy info about how to DVR the big This Is Us ep to ensure you do not miss a single second.)

Question: Do you have any good and hopeful X-Files spoilers for Mulder and Scully shippers? —Erin
Ausiello: How’s this? In tonight’s episode, one of the FBI’s Most Unwanted does some serious sobbing over what might be the corpse of someone integral to their history, leading the other agent to offer some very snuggly comfort.

Question: Last April you had a blind item about a show so bad that even the network it showed on tried to dump it. Could you please tell me what show it was? —Sharon
Ausiello: I feel like I already answered this. Maybe I didn’t. I can’t remember. In any event, it was ABC’s Still Star-Crossed.

This AAnd That…
♦ Since Renata has now buried the hatchet with Madeline, Big Little Lies exec producer/writer David E. Kelley is introducing a new female character in Season 2 to go toe-to-toe with Laura Dern’s tempestuous PTA mom. Casting is underway. Meanwhile, HBO president Casey Bloys isn’t ruling out the possibility of the Monterey-set saga going past two seasons. “We should be so lucky to continue beyond a second season,” he tells me. “We were lucky to make all the schedules work for a second season. Beyond that, who knows?” In sort of related news…
♦ FYI: If you’re not watching Syfy’s just-renewed Happy!, I’m not sure we can be friends anymore.
♦ Reese Witherspoon’s production company is getting a nice shout-out (or two or three) on Younger. A (fictional) executive from Witherspoon’s Hello Sunshine shingle will enter the picture in Season 5 and set her sights on Pauline’s book (while also taking a shine to Zane).