Given the extremes to which Happy! went in its penultimate episode, I’d have bet a fortune that there was no way that Wednesday’s Season 1 finale could possibly shock me. Like, what was left? Yet shock me, the surreal Syfy series did, first by making me misty-eyed (twice) and then by delivering an ending that was actually happy. Happy!, even. How? Read on… 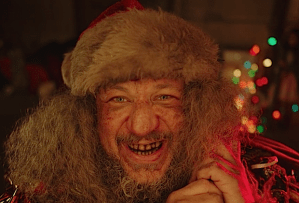 ‘YOU HAVE BEEN A VERY BAD SOCK!’ | As “I Am the Future” began, McCarthy had no sooner gotten done revealing to Blue that his leverage over her was now “resting peacefully in a body bag at County” — and using a Taser to drive home her point — than Nick caught up with her and demanded that the scumbag reveal where he’d find Very Bad Santa (hereafter VBS). Although the crime boss wasn’t fazed by Nick’s threats — or, for that matter, being hung from a barbed-wire fence — it didn’t matter. Happy, having spotted VBS’ sock puppet near the truck that had been carrying Hailey and the other living dolls, had a lead!

With the backup of the rest of his imaginary-friends support group, Happy tortured the truth out of VBS’ sock puppet (via tickling, because, apparently, socks are as ticklish as feet). Yes, he’d abandoned VBS when he’d needed him most, the sock confessed. He just couldn’t take watching his pal, who was so determined never to grow up, hurt people. Upon learning the madman’s whereabouts, Happy and Nick took off for his lair, where, at that very moment, VBS was preparing to lobotomize Hailey as he’d done so many other kids! 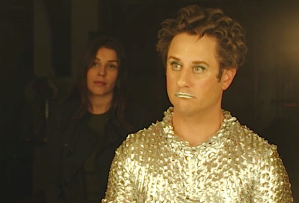 ‘YOU LOOK LIKE A CRUISE SHIP GOT TORPEDOED WITH LIBERACE’S CORPSE’ | Meanwhile, Merry surprised Sonny Shine backstage before his big Wishtacular and found out Amanda’s location by threatening to arrest him mid-performance. Back at VBS’ lair, Hailey’s scream tipped off Nick and Happy to her whereabouts. Before they could get to her, however, Sax landed himself in not one but two bear traps. “I just keep discovering bold new frontiers of suck,” he couldn’t help but remark. While he freed himself from the painful restraints, Happy flew to Hailey’s rescue and took on VBS himself!

By the time Nick was on the move again, VBS had trapped Happy in a jar, and Hailey had made her way to the roof. There, VBS pleaded with the little girl to “fly away” with him so that, unlike him, she’d never have to grow up. After Hailey nearly lost her footing and fell, to her surprise, VBS was gone. So she climbed down from her perch, rounded a corner and came face to pistol with Nick. At a loss as to how to reassure her that he was a good guy, he blurted out, “Happy sent me.” In response, she said, “Daddy?” Before their awkward conversation could go any farther, VBS attacked Nick. 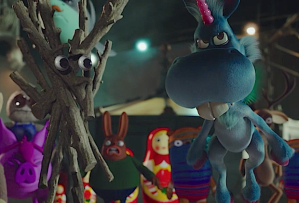 ‘LET’S REGIFT THIS FRUITCAKE!’ | At first, VBS seemed to have the advantage. Since he considered himself “the spirit of Christmas,” only magic could hurt him. So, as Nick bashed his opponent with a brick, he cracked, “Hocus pocus, motherf—er!” Unfortunately, at that very moment, Sax suffered another heart attack. VBS would have merrily tossed him off the side of the building, had Happy not shown up — with reinforcements: his posse of imaginary friends! “Cut him, Twig,” the little blue unicorn instructed a literal stick figure. By the time VBS had shaken off Hailey’s rescuers, she had given Nick his heart medication, and he was at least slightly rallying.

As VBS came running toward Nick and Hailey, Sax thankfully had the strength to pull the trigger, sending the madman crashing through a skylight. As he hung there, the show stunned me, in the loveliest way, by showing him some compassion: VBS’ sock puppet returned to him then, tenderly wrapping itself around his hand. Back on the roof, Hailey informed Nick that she’d told Sonny Shine she only had one wish — to meet her dad. Unfortunately, it looked like their meeting was going to be brief. Seconds after Sax had reunited Hailey with her mom, he collapsed. “Cue the music,” he told Happy. “Fade to black.” 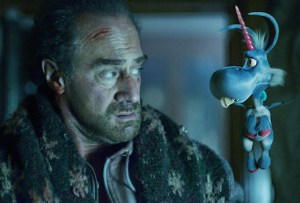 ‘HERE COMES THE FUN!’ | From there, we cut to Merry at a grave and, if only for an instant, thought maybe Nick really had kicked the bucket. But it was her mom’s grave at which she was rendezvousing with Nick. And she had good news: Word on the street was that Blue’s password had died with Sax. At Hailey’s, the little girl noticed that Happy was fading. That was because she was growing up and didn’t need him anymore, he explained. But if he wasn’t with her, where would he go? Maybe somebody else will need him, he suggested before vanishing while singing his song one last time. (Again, big-time sniffles.)

As luck would have it, Nick needed Happy — badly. Sax insisted that this was not his “darkest hour” and, in fact, he was “a goddamn royal flush.” But yeah, OK, he was scared to death by the mere prospect of going to the movies that afternoon with Hailey. He couldn’t, as Happy suggested, do what came naturally. “Dismemberment comes naturally to me!” So thank goodness his partner was going to be around to lend a hoof! Then, after the closing credits, Disco Mikey delivered the Orcus to Blue in prison. Afterwards, the mobster was “hungry.” Hmm. What did you think of the Season 1 finale? Grade it in the poll below, then hit the comments.