The members of CBS’ SEAL Team this Wednesday at 9/8c are in the midst of readying for deployment when a tragedy accelerates the timetable, forcing slow goodbyes to be hurried, in-flux relationships to be rushed toward some semblance of resolution. For promises to be broken.

And that’s just the calm before the storm, since the team’s arrival in JBAD will thrust them into an “environment will either tear them down or elevate them,” says series star David Boreanaz. Team leader Jason Hayes himself will “unravel a bit” during deployment, as his portrayer previews in the in-depth Q&A below.

TVLINE | Do you feel like this week’s episode, with the deployment, is a good entry point for people who haven’t sampled SEAL Team yet?
You get a sense of what it’s like for them leaving their families and going into a whole other world that we call deployment, so definitely. Loose ends will be tidied up, but they’re being tidied up a little fast because of the situation, because we’re going so fast into Afghanistan. I also feel like it’s going to be a whole new show once we are on deployment, character-wise, allowing us to do things that we wouldn’t be doing if we were back home.

We have some good things coming up that will stretch these guys, but we’ll still get insight into how they deal with being overseas away from their families and their loved ones, and the ultimate sacrifice of defending our country, putting their lives on the line in order to achieve security abroad. It’s a good place [for new viewers] to start. 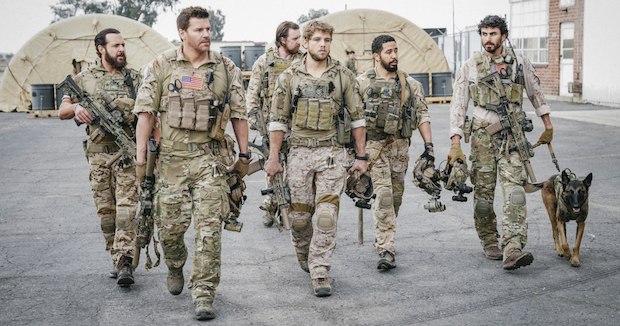 TVLINE | How might a deployment episode look different from what we’ve seen on the show thus far?
Well, you’re going into a base [in Jalalabad], where they’ll be living in hooches surrounded by the general, intense atmosphere around them — but you’ll also see the internal makings, how they have fun. Bars that are set up within the compound, shooting ranges, how the characters really kind of explore their personalities… maybe a tomato garden to emphasize the love of the doldrums. One of the interesting things when I started this series was talking to one of the main guys who was actually there. He’s like, “We used to have patches of grass that we would keep over there just to smell, to remind of what we’re missing.” Bringing stuff into an environment that is not what you would usually see is going to be pretty funny.

TVLINE | It almost sounds a little M*A*S*H-like — kind of how they had “The Swamp” and they’d make moonshine and stuff.
Very much so. They’ll be making moonshine and hanging out in their hooches, exploring the girls on the base…. For these types of guys, it’s going to be fun.

TVLINE | What kind of feedback have you gotten about the show’s authenticity? Because from where I sit, it feels real — but I admittedly know nothing.
We were “6 Certified” early on as far as the look is concerned, with the kits and the guns. If you look straight across the board as far as what we’re in and what we’re doing, we’re, I would say, 95-percent authentic. Now, take into account that there are usually things that we do on these specific missions and/or hunts that you can show and that you can’t show. But we want to shoot this footage like you’re there with the SEALs. I know [executive producer] Chris Chulack has that down in the vision, that we want to be with them. 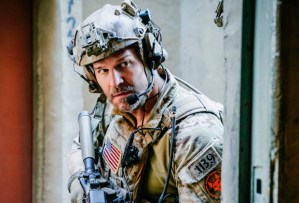 TVLINE | It’s like a first-person shooter sometimes.
Yeah, very rarely are we on the other side, so you’ll come in with us, and that’s a testimony to why these shows go by really fast. They’re strong, independently shot in a very naturalistic, doc-y style. And if we’re on a mission and I’m talking to TOC, I’m not going to dumb it down for the audience. They’re going to have to catch up with the language and understand. We don’t want to say what these initials are, they’ve just got to learn them, which I think has been a fun thing.

TVLINE | The catalyst for Wednesday’s episode is that the team anticipates having more time before deployment, but circumstances become such that they need to pick up and go. Who is rocked hardest by that accelerated timetable?
We all deal with it differently in certain ways. I mean, Jason obviously is at the end of a separation and divorce, and there’s much drama to be had in how it hits him, leaving his daughter and son behind. That’s some pretty heavy, raw quake there. Clay is dealing with the proposition of, “Do I marry this girl before I go into deployment? I don’t really know her that much.” Ray is dealing with a busted-up shoulder — should he go, is he really 100-percent? There’s a lot that’s going to rock them, and how they adapt to this new environment will either tear them down or elevate them. 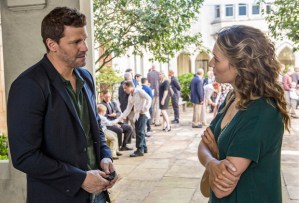 TVLINE | Regarding Jason and Alana: When she said in the last episode, “No one knocks down doors forever,” there was a look on Jason’s face. What is going on in his head when she says that?
His toe is half in and half out. He’s like, “Man, that’s a big sacrifice,” because part of him is “all team” and then part of him wants this [home life]. Jason is a character that wants a bit of everything.

TVLINE | Jason tasks a reluctant Sonny with keeping an eye on Clay. Will that situation blow up at all, or will Jason keep everyone in check?
Yeah, we’ll keep Clay check. There’s only so much you can razz him on now that he’s made the team. It’s just a matter of him catching up to the experience. He’s a rookie, but he’s excellent at what he does. He was chosen for a reason and he’s a top tier guy. He’s got to climb the ranks from Bravo 6 to Bravo 1, which will only happen if I step down.

Those relationships are interesting, and the relationship I have with Mandy is going to be interesting in the fact that she is our eyes and ears. We see how personal she gets with these missions and getting somebody in particular, and how maybe I take on that personal front affects me. I do think we’ll see Jason start to unravel a bit towards the end of the deployment session, and that leads to some interesting conflict and some good relationship building. It’s going to be an on-your-edge kind of craziness. 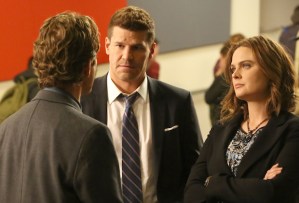 TVLINE | Having played Bones‘ Booth — also a military vet — for so long before this, do you have any “litmus test” in your head where you ask yourself, “Have I done this scene, this line reading, a little too Seeley and not Jason enough?”
No, I’m able to totally separate them. Seeley was way more grounded. He had a little more patience. Jason is an extremely alpha-driven male, where it’s all about “win”… and also “kill.” His environment, obviously, is not all about hanging out at diners and eating pie. It’s a different type, an Americana kind, of atmosphere. His job is high-risk, and these guys are very compartmentalized. They have a lot of issues that, quite honestly, will be fun to explore.

TVLINE | Lastly, by my math you’ve been acting for 20 years straight—
Maybe more without getting paid! [Laughs]

TVLINE | But at least 20 years at the top of the call sheet. Is that just how you’re wired? I have to imagine you have people in your life saying, “You know, you can take some time off.”
To be honest with you, Matt, I like work. I was brought up in an Italian family and was always working. I started in the sixth, seventh grade working at the farmer’s market or selling trees during Christmastime, or being in construction in high school. I didn’t really know much more to do, but to keep myself busy by working — or if I was playing a sport to train and work, and drink milkshakes to try to gain weight! My mentality ticks towards work; I don’t idle very well. And when I think of taking some time off… I don’t know what that would be like. Maybe that’s something I have to meditate on, because I really love working and I love the creative process.

That’s not to say I don’t enjoy some time off, because I do when I take that time, but I’ve been fortunate to be around some good people that have elevated the game. And with a show like this, physically it’s demanding, mentally it’s demanding, but you also have to make changes and you have to evolve. We’re still finding the areas of the show that we like, what works and what doesn’t work. That’s exciting.

TVLINE | And I reckon that with acting, especially, if the opportunity is there, you probably want to seize it because the actor’s life is so unpredictable.
It is. And I value being an executive producer on shows, and working as a director. It’s a triple threat for me. I rewrite a lot of dialogue on our show. There’s a lot of stuff that goes on that people aren’t aware of, so for me there’s more than just “hitting a mark,” and I pride myself in that. Being able to deconstruct scripts, rewrite dialogue, bring ideas to the table that are actually going into the storyline… what makes sense and what doesn’t…. Whether it’s producing or acting or directing, I love all of it.

Starting out in this business, I remember a DP saying to me, “Don’t just keep your eye on the dollar bill. To see the light, you have to kind of open yourself up and learn, and be on the set and push yourself, and try other things.” Because that’s valuable, to be on the set. Don’t just go from set to trailer to home. Hang around, look what the gaffers are doing and talk to them. You’d be surprised. You learn how to light things! It’s fun.