Ladies, when you ask your men what their plans are while you’re away and they say “working,” know this: There’s at least a chance they’re planning a rendezvous with a murderous gay escort.

At least that’s what happened to poor Marilyn Miglin (played to perfection by the most special of guest stars, Judith Light) on Wednesday’s third chapter of American Crime Story: Versace, which blew us back to Chicago in May 1997.

The moment Marilyn returned home from filming a Home Shopping Network segment in Canada, she sensed something was wrong. And there was something wrong: Her husband Lee had left an open carton of ice cream on the kitchen counter. Also, he’d been murdered. 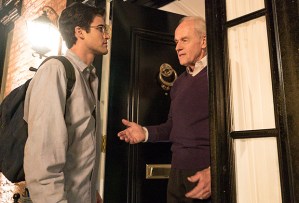 A flashback to a week earlier revealed that Andrew and Lee had a semi-regular thing going on, though Andrew’s latest visit — which would turn out to be his last — came as a welcome surprise to Lee, who didn’t even know that Andrew was in town. And he definitely didn’t know that Andrew was going to wrap his head in masking tape and drop a bag of concrete on his chest.

Of course, there are a few details about Lee and Andrew’s night together that weren’t made public — like the entire “Andrew” part. “He won’t steal my name,” Marilyn told investigators. “Our good name. We worked too hard.” (That speech and the one about why she wasn’t showing her grief were exquisite.)

With his third kill under his belt, Andrew took off in Lee’s Lexus. But when it became apparent that the authorities were tracking him via Lee’s car phone (remember car phones?!), he ditched it in favor of the now-iconic red pickup truck. And all he had to do was kill one more person.

* How did you feel about the episode’s noticeable lack of… Versace?

* Also, I looked into Marilyn’s son on IMDb. He was indeed a pilot in Air Force One, but he only snagged two more roles before quitting the business. (His latest credit is for appearing as himself in a Dateline NBC special about Gianni Versace’s murder.)

Your thoughts on ACS: Versace‘s third outing? Drop ’em in a comment below.