It was homecoming for Will Ferrell, who returned to Saturday Night Live this weekend and immediately reprised his role as George W. Bush. The greatest hits, however, pretty much stopped there.

Folks tuning in to see the return of Jeopardy host Alex Trebek or legendary sports announcer Harry Caray were left to make do with, umm, Jacob Silj. Thankfully, Ferrell still managed to put on a great show, kicking things off with a tuneful monologue that found the potentially concussed host wandering into the audience to sing about the “rudest man in show business,” Lorne Michaels.

The episode really picked up in the second half, beginning with another stellar Heidi Gardner segment on Weekend Update and a sketch responding to one of the #MeToo movement’s most controversial subjects.

BEST: DINNER DISCUSSION
This was, in a word, brilliant. The allegations against Master of None star Aziz Ansari have sparked a fierce debate, and no one’s really sure how to talk about it. This sketch perfectly captured the spirit of that discomfort. It wouldn’t surprise me to learn that the idea for this one started percolating ahead of last week’s show, but was held until everyone involved knew they had it just right.

BEST: NEXT FOR MEN DEODORANT
Ferrell starred in countless classic commercial parodies back in his day, so it was pretty great to see the show pull off an especially good one upon his return. Here, he played a man in need of an extra strong antiperspirant, knowing full well that it’s #TimesUp for him. 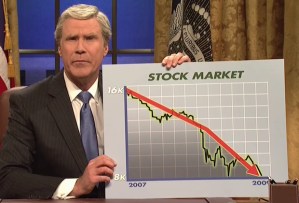 BEST: GEORGE W. BUSH RETURNS
Sure it was a nostalgia play, but Ferrell’s return to the role of Dubya also had some much-needed commentary on how the world seems to have forgotten the mess made by the original “really bad” president. Nicely done. [PLAY]

BEST: CHUCKY LEE BYRD
This absurd infomercial for what turned out to be a compilation of ’50s-style pedophile anthems (including “Cruisin’ In My Windowless Van,” “I Left My Heart Across State Lines” and “Our Love Is a Crime”) was so wrong, yet so hilarious. Funniest of all was the discovery that they were actually released during the 1980s.

HONORABLE MENTION: HEIDI GARDNER on WEEKEND UPDATE
Few cast members have had better debut seasons than Gardner. She already had her breakout moment last November when she appeared on Update as every boxer’s girlfriend Angel. Teen film critic Bailey Gismert wasn’t quite as good, but Gardner was still excellent. Definitely wouldn’t be surprised to see this character return in the not-so-distant future.

WORST: FIGHTER PILOTS
Someone’s going to have to explain to me why this sketch, about a fighter pilot with the codename Clown Penis, got the post-monologue slot, when about three or four of the best sketches aired after 12:30 am. You know you’ve got a real dud on your hands when not even Ferrell can make it work.

WORST: THE HOUSE WITH WILL FERRELL
Ferrell was already in one bomb called The House, so I guess he’s two-for-two? This recurring Real World spoof has never been funny, no matter how many times Beck Bennett and Kyle Mooney try. Also, what a waste of a Tracy Morgan cameo!

What were your favorite sketches this week? And what missed the mark? Grade the episode via the following poll, then hit the comments to flesh out your thoughts.