Warning: The following contains spoilers from the One Day at a Time Season 2 finale. Proceed at your own risk.

One Day at a Time‘s Season 2 finale was especially emotional, as the Alvarez family paid tribute to their beloved matriarch.

Surely no one expected that Rita Moreno’s Lydia would die, but that didn’t make seeing her in a hospital bed any less painful. The character suffered an off-screen stroke at the close of Episode 12 and, after an invasive surgery to stop the hemorrhaging, was placed in a medically induced coma. What followed was a bottle episode that found Penelope and the kids, as well as Dr. Berkowitz and Schneider, telling Lydia just how much she means to them. (Cue the tears!)

* First up was Alex, who painted his grandmother’s nails as he filled her in on the goings-on at church, the similarities between the Gospel of Luke and Spider-Man, and the latest plot twist in her favorite soap opera. Before giving Berkowitz the room, he told his abuela that he’d see her again soon.

* Berkowitz cued up Lydia’s favorite opera on his iPhone, then said, “Whenever I’m around you, I feel like I’m in an opera: Everything is dramatic and exciting, and in a language I don’t understand, and I never want the show to end.” He then told her he was willing to accept that Berto was the love of her life, as long as she’d be OK being the love of his life.

* Elena called Lydia her “hero,” and thanked her grandmother for accepting her for who she was after coming out as gay. She also revealed that she stopped speaking Spanish out of spite when she was just a little girl, but has since regretted losing that connection to her grandmother.

* Schneider recalled Lydia visiting him in his darkest hour, during his last stint in rehab. He explained it was her love and support that made him feel like a member of the family. Before he left the room, he gifted her with the Alvarez family snow globe first hinted at earlier this season, and kissed her forehead. 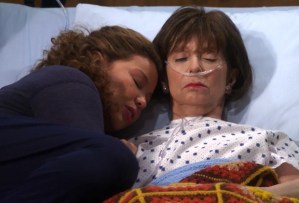 * Penelope was the last to see her mother, after a priest came in to administer late rites. In an especially powerful monologue, Penelope scolded her mom for their earlier argument about Max, then explained how much she resented her for not being supportive when she enlisted in the army at 18. That’s when the waterworks began, and Penelope pleaded with Lydia to wake up and argue with her. In this moment, she finally understood that her mother’s lack of support stemmed from a fear of losing her. Refusing to say goodbye, she curled up next to Mom and sang her a song.

Lydia was then greeted in a dream by her beloved Berto (recurring guest star Tony Plana), who was ready to take her to Heaven. But as much as she wanted to be with her deceased husband, she knew her time on Earth was not yet over. Moments later, she awoke from her coma surrounded by loved ones.

The episode drew to a close on an uplifting note, as Lydia and Schneider were officially sworn in as U.S. citizens.

And now, for some additional thoughts on Season 2 as a whole… 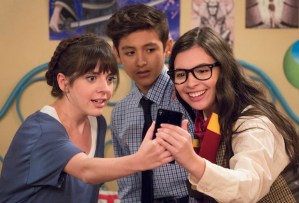 * Watching Elena come into her own, especially after meeting Syd, was a great payoff after seeing her struggle to come out to her family in Season 1. But best of all was getting to witness the moment she confronted Victor about walking out on her quinceañera, and about all the moments he’d miss out on if he chooses to abandon her because she’s gay. (Also great: her tribute to OG Schneider, played by the late Pat Harrington Jr.)

* The chemistry between Justina Machado and Ed Quinn was electric. Here’s hoping Penelope and Max find their way back to each other without either of them having to sacrifice what they want.

* The flashback-heavy “What Happened” episode had a few too many continuity errors for my taste (weren’t we previously led to believe that Penelope and the kids moved into the building two or three years ago?), but revisiting Sept. 11, 2001 through the eyes of the Alvarez family, and to show that Victor and Penelope reenlisted to make the world a better place for then-newborn Elena, was especially poignant. 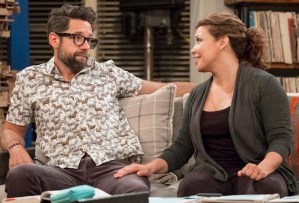 * With Veep taking 2018 off, Julia Louis-Dreyfus won’t be eligible for the Emmy this year. And so it’s probably time to start the #Emmy4JustinaMachado campaign. Her performance in “Hello, Penelope” was next-level great.

* It’s all too easy to overlook what Todd Grinnell is bringing to the table as Schneider. He was absolutely terrific in both the finale and the aforementioned “Hello, Penelope,” as the series filled us in on his backstory and dug deeper into his struggles with addiction. 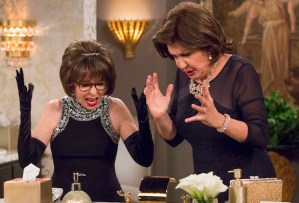 * Tony Plana’s expanded role as Berto added a lot to the back-half of the season. Among the other great guest stars scattered throughout these 13 episodes: Jane the Virgin‘s Ivonne Coll as Esmi (pictured right), The Mary Tyler Moore Show‘s Georgia Engel as Sister Barbara and George Lopez‘s Emiliano Díez as the family priest.

* The writers did a superb job reflecting the current toxicity of politics without letting President Trump become the focus. Getting to see Lydia and Schneider become American citizens was the feel-good moment we all needed right about now.

What did you think of the One Day at a Time finale? And what about Season 2 overall? Weigh in via the following polls, then get a discussion going below.