This week on Marvel’s Agents of S.H.I.E.L.D., Coulson & Co. crossed their fingers as Zephyr One set course for The Lighthouse. Mack and Y-Yo, meanwhile, sought to emancipate the station’s inhabitants from the Krees’ rule… only to meet some explosive obstacles.

Aboard the Zephyr, FitzSimmons came to realize that during the previous timeline they apparently upgraded the aircraft with some cool bells and whistles — including one that allows it to be piloted without an engine, once above the Earth’s atmosphere. As May attempted that first-time feat, shaking the plane to and fro/its gravity off and on, Daisy found herself in a below-decks throwdown with Sinara. Things got pretty intense between the badasses, given Daisy’s powers outage, but with an assist from Deke — who had resisted Voss’ attempts to coax him into betraying Quake — Sinara ended up impaled on the business end of a metal pipe.

Mack and Yo-Yo meanwhile debated the Lighthousers’ desire to simply “storm the castle” and come back with Kasius’ head on a pike — an option that was removed when a resurrected (!) Tess arrived as a messenger, to warn that with the flick of a button, Kasius can end all of them. As Mack discovers, bombs have been placed through all levels of the Lighthouse. And since they can’t be collected and detached from the remote trigger, Mack and Yo-Yo instead set a trap of sorts. When they demand a face-to-face with Kasius, and goad him into pushing the button, he blows up… a bunch of evacuated levels, with the population all herded onto a safe one. As added salt on their keeper’s wound, Mack detonates everything Kasius needs to keep breeding Inhumans, before he, Yo-Yo and Flint vanish just as the Zephyr docks at the Lighthouse.

Thing is, Kasius knew the Zephyr was on its way. Because just as S.H.I.E.L.D. has (or, sniff, had) its own seer, Kasius apparently employs one of his own. But who could it be? 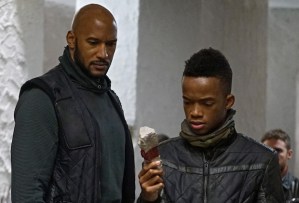 Also during my Q&A with Simmons and Cordova-Buckley, I asked if this storyline pod will eventually reveal that a character we have met in the future is the descendant of a familiar face from the past/present. (After all, some have speculated that Deke is related to FitzSimmons, or that Flint is Mack and Yo-Yo’s own grandkid.) “Look, you’re sort of on the right track, that there might be connections..,” Cordova-Buckley answered. “But, again, we have not found out if there’s any connection between us and Flint, and we have not found about the other connection you just made.” Personally, the actress says, “I’m hoping that Flint has something do with us.” And short of a blood relation, “I want to adopt him and just bring him back [to the present]! I want to have him in my house every day, because I love that kid so much!”

This much the two scene partners can confirm about the remainder of this timey-wimey storyline. With the entire S.H.I.E.L.D. team now back at the Lighthouse, and Kasius’ ranks depleted, the time is right for an all-out, winner-takes-all melee.

“The revolution has started, and there has to be a culmination to it,” Simmons says. “There has to come a point where Kasius and people from our team come to a head, where there is a final conflict. It has to happen — and it will happen.”