From a surprise queen-testant to a bonkers talent show, Thursday’s season premiere of RuPaul’s Drag Race All Stars gave viewers plenty to gag on.

If you’re new to the game, here’s exactly how things work in Season 3: After each competition, the two top-scoring queens will face off in a lip-sync battle, with the winner deciding which of the bottom two queens will be sent home.

Following a fierce battle set to Nicki Minaj’s “Anaconda,” BenDeLaCreme — who also won the premiere’s reading challenge — bested Aja and chose to send Morgan McMichaels packing. (Or so we think. Anybody think they know what Ru’s final “I’ve got your back” moment was all about?)

Since premieres are all about first impressions, let’s discuss how the queens presented themselves this week:

AJA | Easily the biggest surprise of the premiere, Aja has grown by leaps and bounds — and lips and cheeks and a new chin, apparently — since placing ninth in Season 9. Once criticized (by me) for her low-energy performances, Aja put her damn all into this talent show (that double-decker death drop!) and even gave BenDeLaCreme a run for her money in the lip-sync battle. I went into the premiere wondering whether Aja truly deserved to compete as an “all star,” but by the end of the 90-minute opener, I was sold.

BEBE ZAHARA BENET | She might not be the queen I was expecting to appear behind Door No. 1, but BeBe is an absolute forced to be reckoned with, and I kind of love how effortlessly she intimidates the competition. A few of the queens dismissed BeBe — I believe “Sit down, grandma!” was Milk’s reaction to her arrival — but they’d be wise not to underestimate her. 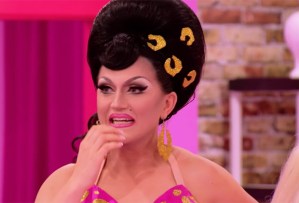 BENDELACREME | I was rooting for this queen the second I spotted that Judghead crown on her head, so I was thrilled to watch her win both of this week’s challenges. At the risk of politicizing Drag Race, it’s nice to see someone with BenDeLaCreme’s respectful attitude (“I’m here to show that you can win with kindness and integrity”) being rewarded for her efforts.

CHI CHI DEVAYNE | From the moment she stepped onto the runway (sans padding!) in those jazz flats, Chi Chi’s spot in the bottom two was a done deal. Let’s not even discuss the baton twirling.

KENNEDY DAVENPORT | I crown thee Queen of the High Kicks™. That is all.

MILK | This overzealous queen opened the premiere by bragging about her “outside-the-carton” way of thinking, which she followed up with a mid-level runway presentation. If I’d been in Ru’s shoes, I might have reserved a spot in the bottom two for Milk, likely sparing Morgan McMichaels.

MORGAN MCMICHAELS | Speaking of Morgan, she was another queen who talked a big game (“You can’t kill evil that easily!”), but ultimately failed to live up to her own hype. Still, I don’t think she belonged in the bottom.

SHANGELA | You’d think Miz Laquifa Wadley would have been given an honorary spot in the Drag Race Hall of Fame by now, but it seems the Powers That Be are making her earn it. Shangela’s haters (aka Milk) are out in full force, but judging from that sick performance she gave at the talent show, she doesn’t have anything to worry about — at least for a few weeks. Third time’s the charm, right?

TRIXIE MATTEL | I loved everything Trixie put out this week, from her shady opening line (“There’s nobody here — it’s like a Morgan McMichaels meet and greet!”) to her hysterical (and haunting!) performance about humanity’s inevitable march towards death. Brava!

VANESSA HUDGENS | I think it’s great that Hudgens is “really into voguing right now,” but if I’m being honest, I would have given the win to the pork chop. (I don’t know what that was, by the way, but I loved it.)

Were you pleased to see BeBe back in the game? And do you think the right queen was sent home first? Grade the premiere below, then drop a comment with more of your thoughts.