The very first shot of Thursday’s How to Get Away With Murder features Laurel lying in her hospital bed, agonizing over the events of the last few days. And frankly, the fact that she’s the only character curled up in the fetal position — when everyone on this show has reason to be — is nothing short of a miracle.

Yes, Laurel’s baby is alive and stable; yes, Simon is still clinging to life, post-gunshot to the head; and yes, Asher isn’t behind bars anymore. But aside from those facts, there’s little good news to be found in Thursday’s hour, which finds Laurel, Annalise & Co. dealing with the aftermath of That Night At the Party.

Here’s what went down in this week’s installment:

THE LAUREL SITUATION | On the fifth day of her hospital stay, Laurel receives the disheartening update that she’s not yet allowed to leave, given the psychiatric hold. And even though it’d be easy to blame Laurel’s father for the extended hospital time, Annalise confides to Frank and Michaela that she’s the real reason Laurel can’t go home yet. Despite the variety of legal options at Annalise’s disposal to get Laurel home before her custody hearing, Annalise believes her ex-student poses too much of a risk to herself, and others, to justify leaving the hospital. After all, what if those test results were real, and not the result of Jorge Castillo’s meddling? What if Laurel was doing cocaine, or she is bipolar? So, Annalise does what she does best, and lies to Laurel that she’s trying her best to get her home — when, really, she’s doing no such thing.

Later in the hour, though, while Michaela is babysitting Laurel in her completely uninviting hospital room, Laurel reveals the real reason she went into labor early: Frank. As you’ll recall, when Laurel was attempting to pull Frank and Connor apart from a physical scuffle a few hours before the Caplan & Gold party, Frank elbowed Laurel’s baby bump, which led to her horrifying elevator delivery that night. Laurel begs Michaela not to tell Frank what he did, seeing as “it’ll kill him,” but Michaela sees no choice. She informs both Frank and Annalise that Frank’s aggressive shove brought the baby into the world early, and Annalise — realizing now that Laurel is not really crazy — convinces Isaac to evaluate Laurel and get her released from the hospital. Which he does! (OK, so maybe this episode wasn’t all bad news. Just, like, 99 percent of it.) 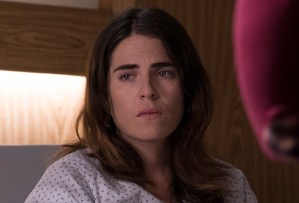 Upon returning to her apartment that evening, Laurel hears Dominick’s cell phone go off in Frank’s jacket pocket, and she’s appalled that Frank is still holding on to the device after Dominick was killed. That’s when Frank finally reveals the voicemail from Wes that remains on the phone — and just as Laurel begins to replay the voicemail on a loop, Dominick’s phone rings, and Laurel recognizes the number. Ignoring Frank and Annalise’s pleas not to answer it, Laurel picks up and utters an unexpected greeting: “Hi, Mom.”

THE SIMON SITUATION | Despite what’s going on with Laurel and the baby, Annalise finally revisits her class-action lawsuit in this hour, recruiting Connor, Asher and Oliver to sort through the paperwork on the dozens of clients that will be involved. But not long into the process, it’s clear that Asher and Oliver are too distracted to focus on the lawsuit; Asher’s still worried he’ll be thrown in jail any minute, and Oliver is obsessing over Simon’s life-or-death limbo. (In a very Oliver move, he hacks the hospital’s intranet and gets access to Simon’s medical charts, because… he’s Oliver, and he does that kind of thing.)

Oliver becomes so consumed with guilt over Simon’s situation that he visits the hospital himself, lying that he’s Simon’s boyfriend so that he can visit him. But not long into Oliver’s visitation at Simon’s bedside, Asher and Connor arrive and convince him to leave. In a devastating heart-to-heart, Asher assures Oliver that if he lets those guilty thoughts in, they’ll consume him; Oliver has to find some way to repress it all, otherwise he’ll lose his mind. (Healthy coping mechanism!)

THE BONNIE SITUATION | Realizing that Bonnie could help locate Laurel’s hard drive and infiltrate the relationship between Jorge Castillo and D.A. Denver, Frank convinces Annalise to visit Bonnie and apologize to her. Reluctantly, Annalise does, and the two women have an incredibly intense conversation — although it doesn’t seem like they’re capable of much else.

Annalise apologizes for firing Bonnie and making her feel alone, and Bonnie reassures Annalise that although she said “I love you” a few weeks back, she’s not in love with Annalise. “What we are to each other is so much more complicated than any stupid husband or wife or girlfriend,” she says.

Ultimately, the conversation ends on a — surprise! — heartbreaking note, in which Annalise confesses that she helps her students because she wants to stop feeling empty inside, to stop feeling like she’s a horrible person. Referencing the night that she attempted suicide after losing her son — a night when Bonnie saved Annalise’s life by resuscitating her on the bathroom floor — Annalise tells Bonnie, “Think of all the pain we could have avoided if you just let me go.” (And after this chat, Bonnie agrees to act as a mole in Denver’s office, keeping tabs on his interactions with Jorge.)

* After worrying that Tegan may have gotten fired following the events of the Caplan & Gold party, Michaela visits her former boss in an attempt to clear the air. But Tegan is none too pleased to see her onetime intern show up at her parking deck, and she warns Michaela never to contact her again, lest she wreak even more havoc on Tegan’s life.

* While going through paperwork for Annalise’s class-action suit, Asher stumbles upon an interesting case: the file of a man named Nate Lahey, who seems to be the father of Annalise’s ex-lover/current detective pal.

* D.A. Denver pays Jorge a visit in his car, admitting that he hasn’t been able to track down Dominick. But there’s a bigger problem at play, Denver tells Jorge: “Bonnie Winterbottom.”

OK, your turn! What did you think of Murder‘s latest installment? And are you excited for Laurel’s showdown with her parents next week? Hit the comments!