The heroic apple doesn’t fall very far from the tree, The CW’s Arrow will suggest this Thursday at 9/8c.

In the episode “We Fall,” Oliver’s determination to forge ahead with just OTA — while Curtis, Rene and Dinah do their own thing — becomes complicated when his son is endangered in a school bus crash born of Cayden James’ handiwork. 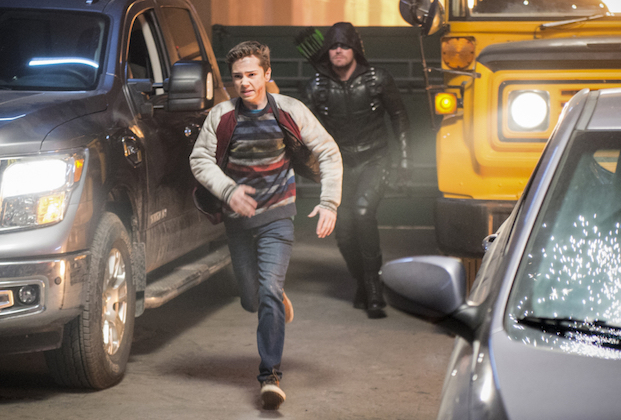 “William is on a trip with his class and of course things go wrong, and William has to rescue his friends,” says Jack Moore, who turns 15 in April and first played Oliver’s offspring during Season 4. “A bunch of explosions go off, and I got to do some pretty cool stuff.”

Could it be that these recent months spent living with the Green Arrow has rubbed off on William, and infused in him the importance of stepping up during a crisis? “Yeah, I think so,” Moore says. “Oliver really has had an effect on him.”

Alas… any bonding that the two have enjoyed during the first half of Season 6 threatens to come undone imminently, as this week’s events reveal that Dad has been “suiting up” on the sly, and thus going against his word that he’d stay out of harm’s way (lest William lose a second parent).

“I think William will be very disappointed, because Oliver made a promise to him — and William is not used to being lied to,” Moore ventures. “I think it will really hurt William.” 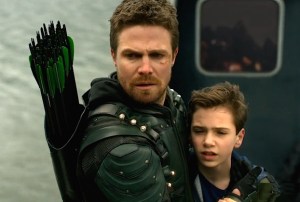 Speaking with TVLine on Wednesday morning before starting his school day, Moore said that when he first entered the Arrowverse — during the December 2015 crossover with The Flash and Legends of Tomorrow — he had no idea that the role would get bigger two years later. In fact, it wasn’t until around the time of filming last season’s cliffhanger finale that he got word that William would be sticking around. (Reflecting on that harrowing, season-ending boat scene between Oliver, William and Adrian Chase, Moore says costar Josh Segarra “got so into character that he actually pulled my hair super-hard! But I didn’t mind, because it was really funny.”)

Now all settled in for Season 6, Moore embraces his ever-growing Arrow family. For one, TV dad Stephen Amell has been “very encouraging,” including during this week’s stunt scenes, and all told is “super-funny” and “super-nice.”

“Working with him has been a pleasure,” attests the teen. 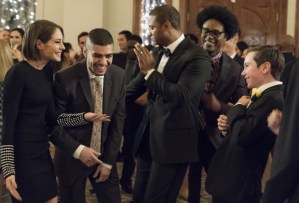 Emily Bett Rickards, who plays Felicity, is no less than “awesome,” Moore effuses. “The scenes with her are really natural, I enjoy them so much.” (Moore adds that he, like William, likely would lean on Rickards for homework help in a pinch!) The young actor also formed an instant kinship with Willa Holland once Aunt Thea came out of her coma, as evidenced during their playful dancing during the “Olicity” wedding reception. “She is so much fun,” he reports.

As Moore looks to the future, it would seem that this week’s episode gave him a taste for heroism — and he likes it. “I want to do more stunts and all that,” he shares. “I want William to get dirty and start manning up!”