This Friday on Marvel’s Agents of S.H.I.E.L.D. (ABC, 9/8c), Kasius’ control of the Lighthouse seems as tenuous as ever, as Mack and Elena aka Yo-Yo work with young Flint to rally the troops for a rebellion. Meanwhile on the Earth’s surface, Coulson & Co. process — and then struggle to act on — the intel that was provided by elderly Robin with her dying breaths.

TVLine invited Henry Simmons and Natalia Cordova-Buckley to preview the obstacles that Mack and Yo-Yo will bump up against in their plan to liberate the Lighthouse, as well as weigh in (and perhaps elaborate?) on the latest batch of time-travel teases.

TVLINE | Mack and Yo-Yo found the weapons and tech stash on Level 3, they’re liberating everybody from their metrics…. What is next? What’s the plan?
HENRY SIMMONS | The plan is to emancipate the human race, from the oppression of the Kree.

TVLINE | Oh, that’s all.
SIMMONS | Let me just say, right off the bat — I want to give a shout-out to [co-showrunners] Mo [Tancharoen] and Jed Whedon and [executive producer] Jeff Bell for giving minorities the power, on TV, to rise up against oppression and free everyone. I think it’s awesome, just awesome, and I want to give them a shout out.
NATALIA CORDOVA-BUCKLEY | I agree.

TVLINE | As Mack and Yo-Yo go about this mission, are they on the same page or might their be conflicting philosophies?
SIMMONS | Listen, these are two strong individuals that are very opinionated and very strong-willed, so there is the problem of getting on the same page. Yo-Yo is the kind of person that is very impulsive and acts before planning, and Mack is the opposite. We’ve seen him reluctant to do things before planning them out first. But in this instance, there’s urgency, and you’re trying to involve the [remaining] human race to get behind us and fight the Kree. So yeah, there’s going to be bickering because they have different philosophies of how things should be done. Also, there’s a degree of Mack that doesn’t want to see Yo-Yo get harmed, even though she’s strong and obviously can take care of herself. But the way his love manifests itself, he wants to protect her.

TVLINE | Would you say the affection between the characters further complicates their conflicts, or does it ultimately help guide them?
CORDOVA-BUCKLEY | I think it helps guide them. I love the relationship between Mack and Yo-Yo because it’s rarely seen, such a mature relationship, one where the people in it are so secure. Usually on these kinds of shows you see relationships between young superheroes who aren’t really settled within themselves, but Mack and Yo-Yo are competent people in who they are. The bickering is just part of the plan, of figuring each other out. For them, every obstacle is just a challenge to make them stronger. The writers have always had them jump the obstacles together.

The whole Framework thing, losing Hope, could have been something that wrecked the relationship — if Mack blamed Yo-Yo for it, or she guilted herself for taking him away from this daughter. But at the core, they’re very similar. They always know they’ll arrive at the same destination; the flights are just going to be different. 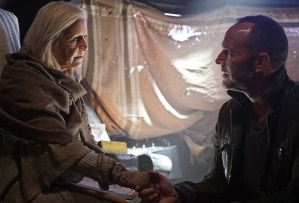 TVLINE | At the time of filming this episode, did either of you have a firm-ish grasp in this season’s time travel aspect? Like, whether or not there is even a timeline where the agents don’t get taken from the diner? Or did last episode’s download only make your head spin faster?
SIMMONS | Whew. Oh boy…
CORDOVA-BUCKLEY | I’m still confused!
SIMMONS | [Laughs]

TVLINE | Like, Natalia, you had the scenes where Yo-Yo talked about how Mack was “gone,” where she had the Kree axe and was ready to do some damage….
CORDOVA-BUCKLEY | When we shot that scene, it confused the hell out of me, because they wouldn’t tell me anything.
SIMMONS | Yeah.
CORDOVA-BUCKLEY | There’s a big thing in that scene that is happening with Yo-Yo that I didn’t know when I shot it. We’re all just as lost as you! Only the writers room is not lost. What I will say is that in that episode, in that flash-forward we saw, where Yo-Yo is ready to take revenge, saying, “I lost faith a long time ago” to Melinda — what I loved about that is that for Yo-Yo, her faith is Mack. We see that in the first episodes I ever did, where she says to him, “Don’t lose faith, Alfonso Mackenzie.” He becomes her faith as they face the world together. And finally in this flash forward we see her say that Mack is “gone” and she’s lost her faith, which goes to show that even if they’re such different people, they really complement each other and they keep each other strong. I now know what happens between the present and that future, and I can’t tell you what it is, but it’s going to show us who Yo-Yo would become without Mack.
SIMMONS | Hmmm….

TVLINE | So, clarity is on the horizon for we the viewers.
CORDOVA-BUCKLEY | Yes. Maybe not the crystal clarity that you want and deserve, but a little bit!