Paramount Network is going back to the ’90s true-crime well with Waco: a six-part scripted miniseries chronicling the infamous 1993 standoff between David Koresh’s Branch Davidian cult and U.S. law enforcement that ended in tragic fashion. Wednesday’s premiere was a scene-setter, but a compelling one, as we got to know the characters whose lives will soon collide… with the world watching. 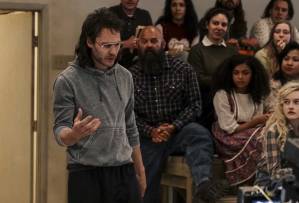 We start with the opening moments of the standoff, with helicopters converging on Koresh’s religious compound and him telling his followers not to panic. He comes out with his hands up, pleading for peace, when a single gunshot rings out — but from which side? Then Waco flashes back nine months to show us how we got there, with Koresh (Friday Night Lights‘ Taylor Kitsch) jogging alongside his young son and preaching to his followers about finding joy without material possessions. Kitsch’s Koresh is a charismatic speaker armed with a serene smile, and one of Waco‘s strengths is showing us the man behind the scary “cult leader” headlines.

When Koresh’s band performs at a dusty roadside bar — he sings “My Sharona”! — he ends up inviting local drummer David Thibodeau (Rory Culkin) back to the compound. “Thibs” isn’t religious at all, but he’s soon won over by Koresh’s warm-hearted hospitality and the family atmosphere among his followers. (Supergirl star Melissa Benoist plays Koresh’s wife Rachel, with Ozark‘s Julia Garner as her sister Michelle.) But maybe “family” is a little too accurate: We learn that the wife of Koresh’s friend Steve (the ubiquitous Paul Sparks) is pregnant… and Koresh is the father. When Koresh later explains to Thibs that all men at the compound are celibate, except for him (“I’ve assumed the burden of sex for us all”), we start to see how Koresh’s massive messiah complex could lead to his downfall. 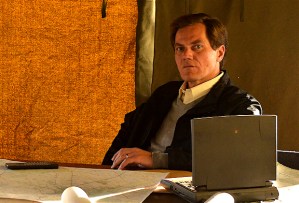 Waco‘s other narrative thread comes on the law-enforcement side, with Michael Shannon — quickly becoming one of those actors who makes any project he’s in worth watching — playing FBI lead negotiator Gary Noesner. We meet Gary as he’s training an agent how to talk to an erratic gunman; if someone’s talking to an FBI negotiator, he explains, “they’re having the worst day of their lives.” And he’s soon sent to Ruby Ridge, Idaho to negotiate with another man who’s having the worst day of his life: anti-government zealot Randy Weaver, who’s holed up in a remote cabin and surrounded by ATF officials after a gunfight that killed both a deputy U.S. marshal and Randy’s teen son.

There’s evident tension between the law-enforcement branches; Fargo alum Shea Whigham plays an FBI commander who orders the barricades around Ruby Ridge to say “ATF” because “I don’t want anyone thinking we made this mess.” Sure enough, he has a huge mess on his hands when one of his snipers misfires and accidentally kills Randy Weaver’s wife. Gary eventually talks Randy into surrendering, but the damage is done: The horror unfolds on live TV, with the Branch Davidians watching, and anti-government protestors are soon swarming federal buildings, demanding answers.

Six months later, the ATF is blamed for the debacle and facing defunding. When they learn that the Branch Davidians are a polygamist cult stockpiling heavy weaponry — and possibly abusing children — they see it as a chance to redeem the bureau. So when Koresh is out jogging with his son one morning, he spots a new neighbor who just moved in right next to the compound: an ATF agent played by John Leguizamo, who’s been sent to do surveillance on Koresh and his followers. The pieces are in place… and the rest, unfortunately, is history.

What’d you think of Waco? (And Taylor Kitsch’s mullet?) Give the premiere a grade in our poll below, then hit the comments with your thoughts.