An episode that features Riverdale‘s men in skin-tight outfits rolling around on the floor on top of each other… does this show know its audience or what?

Archie is getting ready for basketball tryouts — shirtless, of course — but when his new FBI pal Agent Adams suggests he find a way to bond with Hiram, he puts on a very revealing singlet and tries out for the wrestling team instead. (Hiram was a wrestling champ back in the day, you see.) But Archie’s plentiful muscles might just be for show: Kevin easily takes him down during tryouts, and Hiram teases him that maybe he’s better suited to a singing career. Archie’s not great at taking a hint, though, so he comes back for more punishment… and Hiram volunteers to show the kids how it’s done, clamping Archie in a headlock and whispering in his ear, “I always win.” (Noted.) 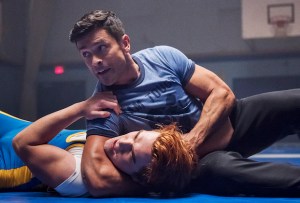 A bruised and pissed-off Archie confronts Hiram, demanding to know what his problem is. (Um, besides the fact that you’re having sex with his mija?) Hiram goes for the jugular: He knows Fred slept with Hermione, and hopes Archie doesn’t have the same “weak character” his dad has. Archie fires back that he was there for Veronica while Hiram was in prison… and Archie, you know this guy has definitely had people killed before, right? Veronica interrupts them before punches are thrown, but after a morning run and a egg-white breakfast at Pop’s, Hiram serves Archie some straight talk: “You will never win,” he tells him, confident that Veronica will soon lose interest in him… and Hiram will be there waiting, because “fathers are forever.” (Kind of a weird thing to say when most non-Fred dads on this show are either dead, in jail or largely absent, but OK.)

Their fiery spat inspires Archie to trounce a more experienced Chuck on the final day of tryouts, though, finally earning a sliver of Hiram’s respect. Daddy Lodge even invites Archie into his study and asks about his future plans. Archie says he used to want to pursue music — yeah, we remember — but now he wants to study business. Hiram, intrigued, offers to take him under his wing and show him the ropes of organized crime ethical business practices… and when Agent Adams calls Archie’s cell for an update, he doesn’t answer. 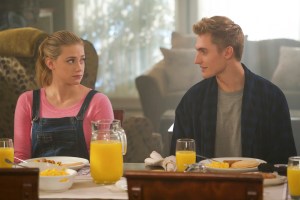 CHIC YOURSELF BEFORE YOU WRECK YOURSELF | Chic’s uncomfortable introduction to the Cooper family continues, with Hal making it obvious he doesn’t want the new guy around. But Betty sees the same darkness in Chic she knows is inside her — he used to dig his nails into his palms, too! — so she doesn’t flinch when Kevin recognizes Chic’s face: He works as a webcam boy, selling sex online. So of course, Betty “investigates” (read: looks at a lot of online porn), and when Chic freaks out that the hostel owner got rid of his computer and all his video equipment, Betty even gives him her old laptop and webcam so he can continue his life’s work. How sweet!

Chic is still wary of Betty, and thinks she must be trying to get something from him. (“Everything’s a transaction,” he grumbles.) But after Alice and Betty defend him from a raging Hal, he finally opens up to Betty, confessing that he was staring at her while she slept. (Thanks for being honest, I guess?) He says he does the webcam thing not just to make money, but also “to get away from the darkness I feel inside me, too.” Betty, intrigued, wants to know more, and Chic cracks open the laptop and starts showing Betty around. Yikes… is Dark Betty about to make her webcam debut? 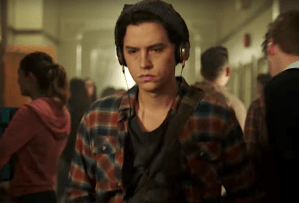 PICKENS A FIGHT | Jughead is still moping his way through the halls of Riverdale High, and a chat with Toni’s grandfather gives him another thing to be mad about: Every year, the town of Riverdale celebrates its founder, General Augustus Pickens… but Toni’s granddad says his people — the Uktena tribe — were the original residents of this land before they were slaughtered by Pickens’ men. The Serpents, in fact, were originally formed by the Uktena survivors. A newly woke Jughead publishes a scathing Pickens exposé in the school paper, threatening the Lodges’ plan for a big Pickens Day celebration to promote their new land development. (Archie can tell you: You don’t want to start a fight with Hiram, Jughead.)

When the town gathers for a festive celebration of Pickens’ not-at-all-problematic legacy, Jughead and his fellow Serpents show up to crash the party, their mouths symbolically shut with duct tape. Toni gives a stirring speech about how Pickens stole this land from her grandfather’s people, and things threaten to get out of hand until Hiram grabs the mic and changes the narrative, honoring Toni and her grandfather and celebrating the town’s diverse origins. (Hey, he’s not filthy rich for nothing.) The controversy seems to blow over until the next day, when the town’s statue of Pickens is found beheaded… and Hiram has a pretty good idea who did it.

* LOL at Penelope approaching a fuming Hal at the Pickens Day celebration and inviting him to join her for “a proper dessert.” Two questions: Is she charging him? And is anyone keeping track of whose parents are sleeping with whose on this show? Because I’ve lost count.

* And don’t think I didn’t hear Hal telling Alice that “you know damn well why” he wants Chic out of the house. Our theory about Chic’s paternity is gaining steam, folks. Hey, where is F.P. these days, anyway?

* Zero mentions of the Black Hood this week. Hmmm.

* Special Agent Adams… that name definitely sounds made up, doesn’t it? Maybe Archie needs to take a closer look at that badge?

* Awfully cold of Veronica to snatch the Pussycats brand away from Josie and unveil “Veronica and the Pussycats” at the celebration. But she is a Lodge, after all.

* Would an article written in the local high school paper really send shockwaves throughout the entire town? When I wrote for my school paper, the students didn’t even read it.

* Chuck got off a pretty solid redhead burn at Archie during wrestling tryouts: “I’d break you, Gingerbread Man.”