Although last week’s The Assassination of Gianni Versace: American Crime Story premiere offered only a fleeting glimpse of Max Greenfield‘s recurring junkie Ronnie, we saw enough of him to know that the New Girl vet went all in for his role as Andrew Cunanan’s (Darren Criss) wiry, HIV-positive Miami pal. The Emmy-nominated actor’s airtime increases tenfold in tonight’s second episode (10/9c, FX), which finds Cunanan bonding with Ronnie on the eve of Versace’s murder.

Below, Greenfield discusses how he prepared for the physically transformative role, reveals the real perk of being a member of the Ryan Murphy Repertory Company, and explains why the end of New Girl hit him like a ton of bricks.

TVLINE | How much weight did you lose?
Of course that’s your first question. [Laughs] Honestly, I wasn’t actively trying to lose weight.

TVLINE | Oh, come on…
I really wasn’t! I happened to be pretty lean already when Ryan offered the role to me. Also, I didn’t have a tremendous amount of time to physically prep. But I wasn’t like, “You know what I’m going to do to prepare for this one? Eat a lot of pizza!” 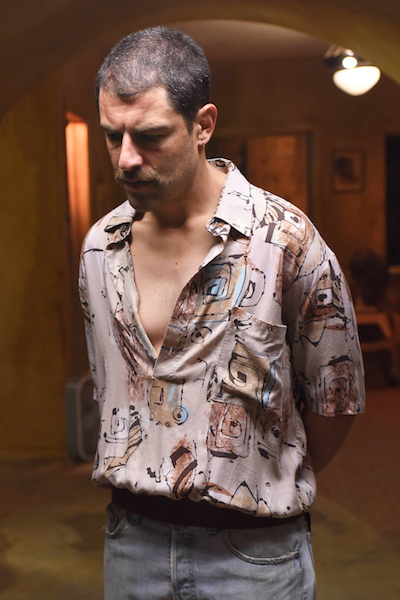 TVLINE | So what did you do. Because you did something. You’re emaciated. I saw bones protruding through your skin.
I suppose I tried to [lose] a little bit [of weight]. But it wasn’t a focus of mine. I knew he’d have a mustache. I had a beard at the time, so I created this sort of cockeyed mustache, because everything about this guy is a little bit sad. Even his mustache is a little bit sad. The real focus for me was [emotional]. It was more about the period of time that this represented. It was 1997, a year-and-a-half out from when they figured out the correct medication for patients with HIV. Ronnie was one of these people who had accepted his own death [from AIDS]. And then all of a sudden they found this medication… It was such a fresh time for those people. To know that you were going to die at any moment, and then to suddenly have to wrap your head around the idea that that’s now not going to happen. I can only imagine what an overwhelmingly confusing feeling that must’ve been for so many people.

TVLINE | Is the real Ronnie still alive?
I don’t know. I know he’s a real person. But what was on the page was so important to me that I really wanted to do my best to honor Ryan’s vision in the story as opposed to trying to play a real person.

TVLINE | What do you think Ronnie makes of Andrew?
Andrew shows him friendship and is nice to him. And I don’t think anyone has done that to Ronnie in a very long time. And he’s willing to look past a lot of warning signs before he finally realizes, “I think there’s something really off here.”

TVLINE | This is the second time Ryan Murphy has cast you as a drug addict. What do you make of that?
[Laughs] That is the beauty of Ryan, and why I love him so much. He can look at an actor and see them in ways they can’t even see themselves. And he pushes them to really go there. I can’t think of more rewarding experiences that I’ve had than working with him both times. If you’re not coming [to one of his productions] with all that you have, I don’t know why you bother showing up at all. Having worked with Sarah Paulson on American Horror Story: Hotel and seeing the lengths she goes to when shooting a scene, you go, “Oh, so that’s what this is going to be like.” [Laughs]

TVLINE | I’m guessing things like craft services are next-level on his shows. Is it hard to then to move on to another production and be greeted by, say, a bowl of Cheerios and a week-old box of Entenmann’s?
[Laughs] Can you imagine an all-Entenmann’s craft service? That’s what heaven looks like. When you get to heaven, God points you to the all-Entenmann’s craft service and says, “You can eat all you want and you don’t gain any weight.” The real perk of working for Ryan is this: His crew — from hair to makeup to wardrobe to the camera department, props, sound, across the board — is so good. One of the reasons the performances on his shows are so [strong] is because these people make us look very, very talented.

TVLINE | You wrapped New Girl a few weeks ago. Were you more or less emotional during the final days of shooting than you anticipated?
I was way more emotional. I underestimated the impact of leaving that show and the character. There was a real mourning period afterwards.

TVLINE | Were you satisfied by the ending?
Yes. I think what the writers did was a lot of fun. It was like a musician at a concert going, “You know what? Tonight we’re just going to play the hits.” That’s what these last eight episodes felt like.

TVLINE | What do you see as your next career act?
I wish I knew. [Laughs] I want to find a really good piece of material and hope that the people who’ve written it want me to be in it. And if Ryan, [comes calling] I’ll do whatever he wants me to do.