It’s a good thing the Wayward sisterhood rescued Dean and Sam from The Bad Place last week, because during this Thursday’s Supernatural (The CW, 8/7c), one of the ladies will need the Winchesters’ assistance.

In a harrowing turn of events, “Donna’s niece goes missing,” Briana Buckmaster, who plays the sheriff, previewed during a break from filming the episode last November. “She’s very close to her niece. So it’s a situation that she doesn’t necessarily feel is necessary to get help for, but she is desperate,” and thus, calls the boys. 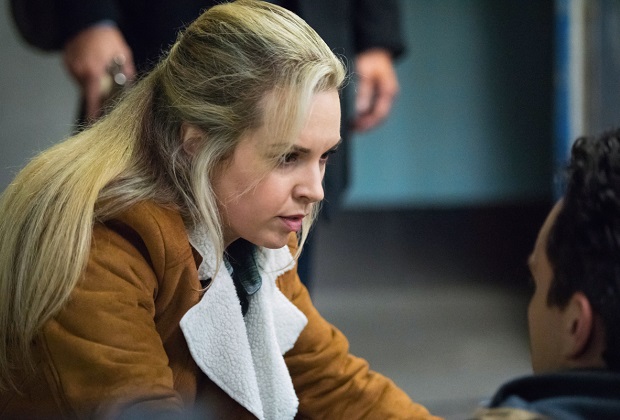 Considering the disturbing circumstances of the Case of the Week — the plot involves a man who sells human parts to monsters in a grotesque online auction — it’s a “very different” kind of installment for the perpetually smiling Donna. “She’s usually kind of funny and bright and sunny, and she’s not in this episode,” Buckmaster described. “She is haunted, she is broken, she is vacant, she is lost, because she’s lost this woman who’s like a daughter to her.”

The storyline makes for “an intense, dark, creepy episode,” Buckmaster continued. “For me, it’s a darker episode than I’ve ever been a part of [on the show].”

The hour also delves “even further into [Donna], what she’s going through, what she’s capable of, and what she’s going to do moving forward,” Buckmaster shared. It’s no surprise, then, that the actress said she was “more excited about this script than I’ve probably been about anything for my specific character.”