This week on The Flash, Ralph rrrrrreeeeached out to imprisoned Barry during a crisis, after a familiar nemesis resurfaced. And speaking of returns, a scene stealer from “Crisis on Earth-X” dropped by, to serve up a curious new clue.

This was one of those times where, based on the episodic photos alone, I had greatly tempered expectations, thinking it would be a big ol’ filler of an hour… or it’d be unexpectedly entertaining/amusing. And while Trickster Jr. was a bit of a monotonous bore, there was a geek-tastic thrill in seeing Prank/Zoey from the original Flash series show up. (Young Matt had quite the crush on Corinne Bohrer.)

But more importantly, this was a “coming of age” episode for Ralph, who slowly but surely has been maturing since his introduction as a douchey dick (as in private eye!). As the episode opened, Ralph was merely struggling with his superhero moniker, after being christened “Stretchy Man” by Trickster. But upon learning that he is not “in-Dib-structible,” he suffered a crisis of purpose, and bailed on RSVPing to the pranksters’ taunts.

But rather than flake out wholesale, Ralph literally slipped into Barry’s Iron Heights cell for a pep talk, and it proved to be a success. Barry assured Ralph that he himself isn’t fearless — and that the pain of being able to help but choosing not to is far worse to live with than any acid burns. Empowered and emboldened, Ralph suited up with his new duds (courtesy of Cisco) and proceeded to save the day by crashing Trickster and Prank’s deadly game show set. He even sacrificed his stretchy self to protect Cisco and Caitlin, as a human canopy, from an acid bath — only to realize that Harry has neutralized the goo in time, saving his life. 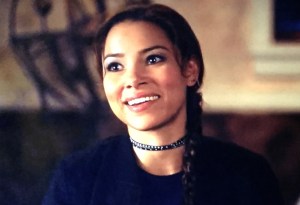 Pressed by the press afterwards for an official nickname, Ralph hemmed and hawed, “I’m elongated, man” — unwittingly assigning to himself a name which he didn’t feel is deep and sexy enough, but he’ll make do. He and Cisco then celebrated the big win with java at Jitters, only to realize neither of them had any cash on hand. Luckily, that chatty, chipper cater waiter from Barry and Iris’ (crashed) wedding showed up to “pay it forward” and cover their tab, before launching into some braining babbling about “the principle of infinite consequences at work in our lives” and what not.

Afterward, we saw the young woman scribbling into a journal… the same symbols that a manic Barry covered the CCPD walls with upon returning from the Speed Force! 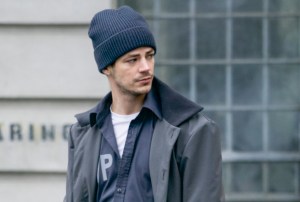 Elsewhere in the episode, Barry (of course!) ran afoul of some prison toughs, but had his bacon saved by Big Sir, a mountain of a man (played by Goldberg!) on whom Henry once performed an impromptu appendectomy. Barry later repaid the repaying of a favor by deftly using his speedster skills to interrupt a beatdown and best the aforementioned goons. During his latest visit from Iris, who longed to touch Barry again, he sneakily vibed himself through the glass partition, allowing their hands to touch.

What did you think of the episode “The Elongated Knight Rises”?