Big little lies caught up with Shaun and Claire’s patients on Monday’s episode of The Good Doctor.

Shaun’s case involved a Muslim woman, who was admitted to the hospital for minor burns to her arm. During a consult, she began having difficulty breathing, and was found to have severe lung inflammation. This didn’t line up with her story about the burns resulting from a small kitchen fire. Shaun, Jared and Melendez performed a routine bronchoscopy, during which Melendez accidentally punctured the bronchial wall — or so it seemed.

Later, the patient began experiencing chronic abdominal pain from methanal toxicity, which can result from overconsumption of alcohol… or exposure to dimethyl sulfate, which is used by terrorists (!!) when building chemical weapons. Since the patient’s religion prevented her from drinking, Shaun confronted her about his much more extreme hunch. She expressed disappointment in him for jumping to conclusions based on her religion, then immediately suffered a heart attack.

Shaun suspected the cardiac episode was a result of the patient’s heart literally burning from chemical exposure — and he was right. This also explained why it was so easy for her bronchial wall to be punctured, which had thinned as a result of the exposure. After being treated with steroids, the patient came clean, revealing that her brother worked for a drug company and stole dimethyl sulfate so she could make her own perfume. 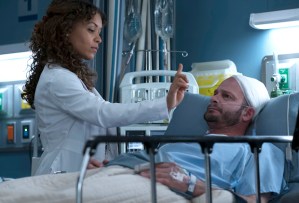 Claire’s patient, meanwhile, was rushed to the hospital by his wife and son after suffering his second stroke in six years. Lim brought him into surgery to stop the hemorrhaging, but he almost immediately suffered a third stroke, suggesting they’d continue to occur — and potentially kill him — without a more invasive procedure. The patient’s wife told Claire that her husband wouldn’t want the surgery if there was a chance he wouldn’t make a full recovery, and to let him die.

At breakfast, Shaun told Claire that he suspected the wife was lying about her husband’s wishes, explaining that if you really love someone, you’ll do anything to keep them alive. When Claire then confronted the wife, she discovered that the patient had a history of spousal abuse. The wife wanted him to die so her son, who was believed to be in the dark about the abuse, would remember his father in a more positive light.

Lim, fearing the wife could be lying, told Claire to go back and get consent, or they’d take her to court — and so that’s exactly what Claire did. After the patient nearly died on the table, it was discovered that he hadn’t been taking his medication in recent weeks. As it turned out, his son was in fact aware that his mother was being abused, and had been switching out his dad’s pills. Eventually, Claire and Lim were able to successfully complete the procedure, but the patient’s wife and son didn’t stick around to see if he was OK, instead taking Claire’s advice and leaving him.

* Glassman and Shaun’s conflict came to a head this week when Shaun insisted that what he needs isn’t a father figure, but a friend. A heartbroken Glassman couldn’t bring himself to respond. 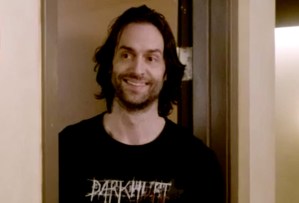 * Shaun got a new neighbor in the form of Undateable alum Chris D’Elia, who moved into the apartment that previously belonged to Lea. We didn’t get his name, but the fact that the character was played by an established actor, and not some rando, suggests we might see him again. (UPDATE: D’Elia will in fact be making additional appearances.)

* Claire learned that sexual harasser Coyle had not been fired. Instead, he was made the hospital’s outreach chair, a position where he’d have very little contact with staff or patients. Feeling wronged, she tracked down Kristen, a former St. Bonaventure employee who was also harassed by Coyle, and vowed to fight the system together.

* Jared patched things up with Melendez, but learned he might once again be out of a job come next year. Melendez is only permitted three surgical residents, and he’ll also have to consider taking on Coyle’s former resident, Dr. Reznick (to be played by Wilfred alum Fiona Gubelmann).

* Melendez disputed Jessica’s suggestion that they made a mistake breaking up, insisting the pain was indicative of how much they meant to each other, even if they’re not supposed to be together.

What did you think of “Seven Reasons”? Drop a comment below with your reactions to the episode.