Monday’s Supergirl — easily the top episode of the season, and arguably one of the series’ best — took the concept of “toxic masculinity” to a whole new level, transporting us to a star that is literally poisonous to men.

The DEO’s plan to retrieve a Kryptonian priestess from Fort Rozz hit a snag when the floating prison was discovered to be orbiting near a star poisonous to men. In other words, no one with a Y chromosome — a list including, but not limited to, J’onn, Mon-El, Winn and Brainy — would get to play hero this week. (You know, unless you count all that important live-saving computer work.)

Fortunately, this show is drowning in powerful women, so Kara didn’t have too much difficulty rounding up a team of kick-ass ladies to join her in space. Imra was thrilled to fight alongside the Girl of Steel, while Psi didn’t have much of a choice, considering the DEO literally has her under lock and key. And then there’s Livewire, who recently started working as a waitress in a  small-town diner to avoid Reign’s ire; the super-villain formerly known as Leslie Willis was reluctant to join Kara’s crusade at first, but she eventually came around. 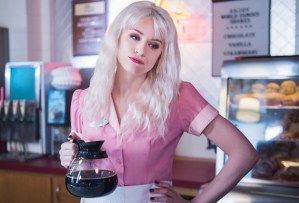 Speaking of Livewire, she and Kara played a highly entertaining game of catch-up during a rare moment of downtime, during which Kara introduced Imra as “my ex-boyfriend’s wife.” This blew her mind for multiple reasons, including the fact that she never knew Kara and Mon-El were ever a couple. (“Wait, Cosplay’s your ex-boyfriend? That’s some Real Housewives drama.”) Still, Kara insisted that she bears no ill will towards Imra: “It’s not her fault. It’s nobody’s fault.”

Kara & Co. eventually tracked down the priestess, though she hardly proved the answer to their prayers. In fact, she barely had time to deliver an off-the-cuff prophecy to Kara (Reign will destroy her, someone’s soul will be absorbed by darkness, her “pretty skin will soon be brittle scales,” etc.) before Reign arrived… and promptly killed her. (R.I.Priestess!)

To be fair, the priestess did share one useful bit of intel with Kara before being murked by Reign — that there are other Worldkillers out there, and they go by the names Pestilence and Purity — but a few more details would have been helpful. Human names? Last-known addresses? Twitter handles? Anything.

Anyway, Reign’s second battle with Supergirl proved to be even more brutal than her first — which is understandable, given the yellow sun-less nature of the fight. The key to victory came in removing Psi’s power-suppresser, which allowed her to go full “Gangnam Style” on Reign; she was so taken aback by the mind-bending blast that she retreated from the fight entirely. Unfortunately, Reign’s exit came after Livewire sacrificed herself to save a powerless Kara from one of her deadly lasers. (Leslie Willis died a hero’s death aboard Fort Rozz. And we salute her.)

As is her nature, Kara blamed herself for Livewire’s death, though Mon-El did his best to convince her otherwise. “I know my being back here hasn’t made things easier for you, but I can see that you’re struggling and I want to help,” he said. “I want to make things better for you. … I promise, I’m a heck of a lot wiser than whoever that was that landed here a couple years ago.” What followed was actually a pretty encouraging speech about how Kara may not have been able to get through to Reign, but she did bring out the good in Livewire — and she did it without the use of her powers. That, he said, was “all Kara.”

As if that wasn’t enough, this week’s episode found time for some unexpected “Sanvers” drama. Alex was practically breathless upon receiving a text from Maggie — kind of like how I get when I order dinner on Seamless — but was crushed to see that her ex merely needed Alex to mail her the passport she thinks she left in their nightstand. Fortunately, Alex had Ruby to distract her from her problems; she made it her personal mission to stop one of Ruby’s classmates from cyberbullying her, even threatening the poor girl with the FBI’s involvement. Is that… legal?

I’ll also admit to getting a little choked up hearing Alex talk about her ex, about how difficult it is to accept life without Maggie as her “new normal,” and about how she’s still hurting. The way Alex looked when she found out Maggie texted her, you’d have thought Floriana Lima was standing in the doorway, ready to give “Sanvers” another shot. Alex is wearing this breakup, and her pain is palpable. (Well done, Chyler Leigh.)

And as always, the episode’s final moments packed the biggest punches. Not only did Sam confide in Alex that she’s been “losing time,” but we also witnessed some girl named Julia get hit by two cars and live. L’s and G’s, I think we found our next Worldkiller.

OK, let’s talk: Were you as crushed by Livewire’s death as I was? Do you agree that this was the best episode of the season? Whatever’s on your mind, drop it in a comment below.