This week on Fox’s Lucifer, Pierce aka Cain was ready to make a break for it — but instead he made a deal with the devil. Meanwhile, unexpected news nudged nascent lovebirds Amenadiel and Linda toward a break-up.

With the immortal cat now out of the bag, Cain/Pierce tended to his gradually healing stab wound while recounting for Lucifer the extent of his millennia-long existence. As “the world’s first murderer” (having offed his brother Abel), Cain was cursed to walk the Earth forever — and frankly he is d-o-n-e, done with that. In a bid to find an “out,” he started monitoring the presence of celestial beings, and thus caught wind of the fact that Detective Chloe Decker once drew blood from no less than the Devil.

It was thus Cain arranged to have Lucifer KO’d (at the close of Season 2) and taken out of the way to the desert, but Lucifer returned from too quickly, upon somehow getting his wings back. Besides, Pierce discovered that when purposely gunned down while at Chloe’s side, he still survived. So the detective isn’t his ticket to death. 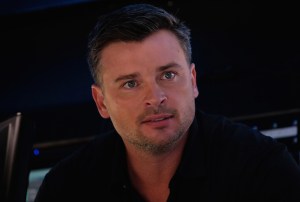 Pierce insists to Lucifer that though he was behind the desert drop-off, he had nothing to do with restoring his wings and taking his devil face. It isn’t until episode’s end, in the course of solving the Case of the Week, that Lucifer has an epiphany: his Father was behind the wings, as a means of Lucifer foiling Cain’s grand plan. God is out to screw his son and Cain, so Luci offers the lieutenant a deal — stick around town, and he will do everything in his power to end the immortal’s life, thus defying Dad’s wishes on behalf of both of them!

* Amenadiel learned that he had chlamydia, presumably contracted from a prostitute (that he didn’t know was a prostitute!). When he alerts Maze, that in turn tips off Linda, who has been keeping her relationship with her BFF’s ex on the down low. That, coupled with Maze’s expressed disapproval of a Linda/Amenadiel hook-up, leads the shrink to end things with her new beau. But the reveal of a false positive, punctuated by a warm kiss, suggests the two will in fact proceed full steam ahead — while Maze gets literally stabby, observing them from afar.

* Having gleaned that Chloe was thoroughly irked by his rogue, selfish behavior with regards to the Sinnerman — and once again taking the wrong cue from a session with Dr. Linda — Lucifer went overboard trying to celebrate “Detective Day,” by reorganizing case files and putting sexy new wallpaper on Chloe’s computer. Chloe saw through and chided his motives, but in the end the devil’s work paid off, when something he said sparks a lead in the murder case.

* Ella was noticeably muted in the wake of being yelled at by Pierce in the midseason finale. After sharing the reason for her retreat with Charlotte, the prosecutor gives Pierce a talking-to, after which he eventually apologizes to Ella — and even allows her a big ol’ hug.

* Dan surfs! And as such, he went undercover when the murder investigation (wrongly) zeroed in on a “gang” of surfers.

What did you think of the episode “All About Her”?