If you’re looking for the next Grey’s Anatomy or another Chicago Med, Fox’s The Resident is not it — and that’s a good thing. From the horrifying opening minutes of Sunday’s series premiere, in which Bruce Greenwood’s chief of surgery botches a routine appendectomy and pressures the selfie-taking nurses into covering for him, it’s clear that the new medical drama is like no other hospital show currently on TV. 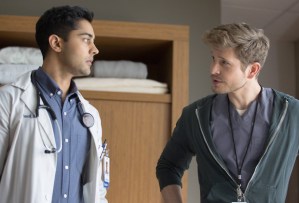 Before you chime in with your thoughts, let’s recap: Devon Pravesh’s (Halt and Catch Fire‘s Manish Dayal) first day as a doctor gets off to a rocky start when he meets his supervisor, the brash Dr. Conrad Hawkins (The Good Wife‘s Matt Czuchry, sporting some serious swagger and some serious tats). Conrad isn’t the warm-and-fuzzy mentor Devon probably hoped for, but the internist is really good at his job, and quickly starts imparting tough lessons on his new charge. For example, when Devon refuses to stop chest compressions on a teenage patient and successfully revives her, Conrad informs him that he’s left the girl brain-dead. While the hospital milks her insurance, her family will refuse to give up hope, even though there is none.

When Conrad isn’t breaking in Devon, he’s taking on chief of surgery Dr. Randolph Bell (Greenwood), who continues to operate despite having a hand tremor. In fact, Dr. Bell’s “complication rate” is so well known among the hospital staff that he’s earned the nickname HODAD, aka Hands of Death and Destruction. The outside world, however, is in awe of the chief as he “performs” surgery with a fancy new machine during a live stream. In actuality, the skilled but unfeeling Dr. Mina Okafor (Billions‘ Shaunette Renée Wilson) does the procedure behind-the-scenes while Dr. Bell — who blackmailed her — takes all the credit. 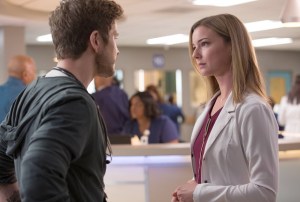 The drama also stars Emily VanCamp (Revenge) as Nic, a kindly nurse who used to date Conrad. (Their almost-tryst in the on-call room is the closest the premiere comes to feeling like Grey’s.) Nic shares this disturbing stat, which could be the series’ logline: “Medical error is the third leading cause of death in the United States after cancer and heart disease. They don’t want us talking about that.” (Raise your hand if you’re never stepping inside a hospital again.)

Nic doesn’t get a ton to do in the pilot outside of being established as Conrad’s ex and the show’s conscience. But rest assured, Episode 2 (airing Monday) hints at a bigger storyline for her, as well as a more layered relationship with Conrad. The second hour also introduces Melina Kanakaredes (CSI: NY) as oncologist Dr. Lane Hunter, while later episodes bring in Merrin Dungey (Alias) as the hospital’s CEO and Moran Atias (Tyrant) as the head of marketing.

What did you think of The Resident? Grade it via the poll below, then hit the comments to back up your pick!