This Friday’s Agents of S.H.I.E.L.D. was a bit timey-wimey and this recap will accordingly be a bit of a mess, so hopefully y’all actually saw the episode and are just here for the good company and lively commenting.

Because this week we were made privy to something I honestly had forgotten to consider: the timeline in which Coulson & Co. were not grabbed from the diner and instead lived (…or didn’t) through Earth’s destruction. So, while Coulson, May and Daisy did their darndest to glean meaningful intel from elderly Robin there in the Zephyr hideout on the future Earth’s barren surface, we toggled over to flashbacks to the team’s escape from the doomed planet, when Robin was still an adolescent. Over the course of those flashbacks, we learned a few things, including:

* May, Jemma, Fitz, Yo-Yo and Robin, at the very least, wound up at the Lighthouse after escaping Earth via the Zephyr 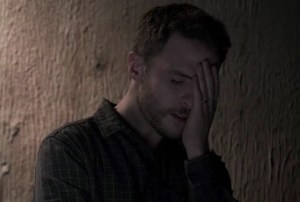 * Fitz had this on his finger during what apparently was the year 2022:

* In fact, during one of Fitz’s tirades, he at the very least speculated that they had already tried to alter the past, perhaps countless times — and yet it always ends the same, with “everyone” dying.

* Mack died at some point (or is “gone,” “never coming back”), resulting in a sour, vengeful Yo-Yo determined to pick a fight with their Lighthouse keepers.

In the future scenes, it was explained that Robin in her old age had lost grasp of time, uttering things relevant to the past, present or future. It was said repeatedly that she typically volunteers visions to her “mom,” but Polly didn’t even make it onto the escape jet. As such, all hope seemed lost… until, at episode’s end, a final flurry of flashbacks revealed a heartwarming/-breaking truth: in the years since Earth’s destruction, May — hard-boiled, ass-kicking, seldom-smiling Melinda May — effectively raised Robin all those years. She thus was the “Mom” in whom Robin would confide her final vision, before succumbing to a stab wound from Voss, a bunker dude who tried, but failed, to kill Daisy before she could travel back in time and explode the Earth again.

Robin’s final words to her “mother” revealed the key to sending the team back through time and saving everyone. Hearing them, may had just one question for the others: “Who’s Flint?”

* Having stayed back at the Lighthouse, Mack, Yo-Yo and Flint successfully made a dash for the weapons/tech stash that Fitz had hidden on Level 3. (Behold the Shotgun Axe, Pebbles!) Afterwards, to protect everyone, they set a trap for the “roach” population, whom Yo-Yo exterminated with some nifty bombs.

* Inside the Zephyr was found a shard of the same Kree monolith that sent the team into the future. (Deke’s dad found and held onto it, until he died.) If the team can somehow find the rest of the slab — maybe if they had someone who can control rocks? — that could be the key to activating the time machine that Fitz sketched out years ago and now is inside the bunker.

* In this week’s bonus scene, Sinara arrived on the Earth’s surface, tasked by Kasius with finding the humans and showing “no mercy” once she does!

What did you think of the episode “The Last Day”?