“I do,” said Will in Thursday’s Will & Grace. But, since the question was, “Do you want to go to your ex’s nuptials?” he probably would have had an easier time of it had he just answered, “I don’t.” Read on, and we’ll review the something old (flames), something new (Jack’s flirtation du jour), something borrowed (time until a scene was made) and something blue (all those cops) of “The Wedding.”

‘YOU’VE NEVER LOOKED WORSE’ | Early on in the episode, Will surprised Jack by revealing that his ex Vince (guest star Bobby Cannavale) was on his way over for breakfast. But they were just friends, Will swore — before panicking when he caught a glimpse of himself in the mirror. “Why is my head on Betsy DeVos’ neck?” he gasped. Once Vince was alone with Will, he revealed that, his commitment issues apparently a thing of the past, he was getting married. “I’m so happy,” Will insisted in such a way that we could tell he was, of course, anything but. Vince said he’d understand if Will didn’t want to attend the ceremony, but naturally, Will promised to be there. After all, he was so happy.

The day of the wedding, Karen was excited to be going to a police ceremony because there was a badge on the list for the scavenger hunt she was participating in — that was why she was hanging out with a monkey (he was worth more than a Kardashian!). Jack was excited to be going, too, since he was sure he’d be able to score. (Mind you, where doesn’t Jack score?!?) Meanwhile, Will prepared for Vince’s big day by overcaffeinating and swearing way too strenuously to Grace that he was fine with Vince getting hitched to someone he’d only known for nine months. Thankfully, she managed to talk him out of going. Or at least she thought that she had… 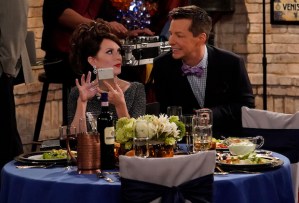 ‘DID YOU JUST EAT AN ENTIRE TRAY OF SLIDERS?’ | At the ceremony, Jack sought out a man in uniform that he could potentially get out of uniform. His trick for figuring out which of the cops was gay? Asking what their favorite TV show was, then zeroing in on Drew, the only one who answered This Is Us instead of The Wire. And Grace, seeing how happy Vince was with Ryan, had no sooner gotten done saying how glad she was that Will had decided not to come when, natch, there he was. She needn’t worry that he’d make a scene, though. All he wanted was to find out from his ex why he’d dumped him. What could possibly go wrong?

After the “I do’s,” Grace intervened before Will could ask the $64,000 question, and Jack learned that Drew had never been with a man before. What’s more, “I love you,” said the smitten young cop. “In the gay world, what we just did was fun but meaningless,” explained Jack, adding futilely that “they” were never gonna happen. Then, before you could say “Holy Mary!” Jack learned that Drew was married to Vince’s cousin, Angela! Nearby, Vince was moved to snap at Will’s constant picking. “This is why we broke up,” Vince hollered. It hadn’t been about him not loving Will, it had been about Will not seeming like he even liked Vince. Ouch. 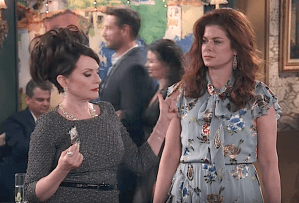 ‘I WISH I WAS MY FRIEND’ | During a toast to the happy couple, Will apologized to Vince and called himself a “sad, lonely man.” In turn, Grace made a toast in which she insisted that no one was more deserving of love than Will. Other than the happy couple. Them, too, sure. From there, the roommates went back and forth, making argumentative toasts, until at last, Vince chimed in that he’d always think of Will as “the one that got away” — and Ryan as the one that hadn’t gotten away, he hastened to add. At that point, Jack made a toast in which he discreetly warned Drew not to ever fall in love, because it’d never work. Unless you were Vince and Ryan. Then sure, it would totally work.

As the episode drew to a close, Vince chased Will down in the men’s room and begged him for reassurance that he hadn’t made a mistake by tying the knot. “You’re spinning,” Will said. And if he could make a commitment after only nine months, Ryan had to be pretty special. “For what it’s worth,” Vince offered, “I’ll always think of you as my ex-husband.” And vice versa, Will replied. Suddenly realizing they weren’t alone in the bathroom, Vince kicked open the stall door… and found Jack and Drew going for Round 2. So, what did you think of “The Wedding”? Were you sorry that Vince didn’t call the whole thing off and reunite with Will? Hit the comments.