Visiting the Scandal set earlier this month for what would be the very last time, any notion of learning anything about the series finale (airing Thursday, April 19) was to be instantly dismissed.

“[We know] absolutely nothing, literally nothing,” insisted Katie Lowes, who plays Quinn. “We don’t even know about next week!” Driving the point home, series lead Kerry Washington said, “Even if you hypnotized us, we couldn’t answer.” At which point we put away our swinging pocket watch.

After all, for six-and-a-half seasons now, this cast knows to expect nothing more than the script for the episode they are about to shoot, which is not perused until the official table read. (Case in point: Before Lowes had widely shared the news that she was expecting in real life, she learned at a table read that Quinn, too, would be pregnant.) And if any morsel of additional intel is requested, series creator Shonda Rhimes “gives you enough pertinent information to get you from A to B,” says George Newbern, who became a series regular this season as Charlie, “but definitely not C, D, E… or anything else!” 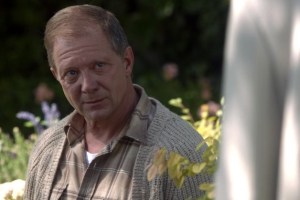 Dating back to early Season 1, Jeff Perry did not know that chief of staff Cyrus Beene would be revealed as gay until Episode 4, when Liv paid his home an urgent Sunday visit and husband James answered the door. In the moment, “I immediately thought, ‘Shonda, how could you spring that on me?'” — a question the actor would promptly answer himself: “Because you know what you’ve written, and there’s nothing heretofore that you’ve written that makes it a problem that Cyrus has been gay.” Says Perry, “Shonda is reallllly skilled at not creating stuff which you can’t end up grounding, justifying and playing.”

That said, there have been a handful of rare instances where specific cast members were clued into an upcoming twist, to properly inform the scenes they’d be playing beforehand. Here are those stories.

DADDY ISSUES | Perhaps the best known instance of a Scandal actor getting “spoiled” for their own storyline, Joe Morton was told ahead of time that in the Season 2 finale, mysterious B613 boss Rowan would be revealed as Olivia’s father (in the photo at top). Prior to that, “Kerry would come up to me and say, ‘Listen, I hope we have some scenes together…,’ and I’d say, ‘Yeah, me too,'” Morton reflects with a chuckle. “But [knowing in advance] put me exactly where I need to be head-wise…. It was perfect for the character, to come onto the show and have a secret that I knew that no one else knew.”

MUM’S THE WORD | In Season 5’s winter finale, viewers discovered that Olivia was pregnant — until, that is, she slipped away to have an abortion. If you now go to Netflix and cue up the episodes that aired just prior, you will notice something unusual about Liv’s wine drinking habit. “Shonda knew that Olivia was going to reveal a pregnancy two episodes later, and she wanted me as an actor to stop drinking in scenes,” Washington says, “because she didn’t want Olivia to be drinking while pregnant.” So in moments like the one with Abby pictured above, you see Olivia “hold the drink but ever actually take a sip.” 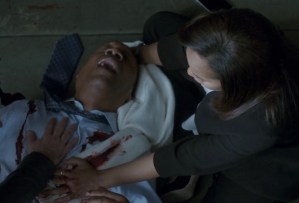 STABBY ISSUES | Toward the end of Season 3, Olivia found her father on the floor of OPA, stabbed. Upon first reading the script for that week, Morton might have feared for his alter ego’s mortality (and his own next paycheck)… had a little birdie not whispered that all would be OK. Castmate Tony Goldwyn, who directed the episode, had shared (with Rhimes’ blessing), “‘Something’s going to happen. Don’t worry about it,'” Morton remembers. Or as Goldwyn himself recalls, “I said, ‘Don’t worry, Joe, you’re not being fired'” — which is never to be forsaken on the deadly, twisty, D.C.-based drama. 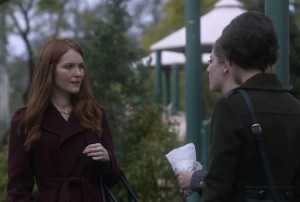 WHAT THE HUCK?! | Last season, Abby’s encounters with some enigmatic and deep-pocketed D.C. power players — juxtaposed as they were with a flashback in which Huck, elsewhere, got gunned down at close range — suggested that she was complicit in her former colleague’s apparent murder, as she pursued her own political goals. Darby Stanchfield, though, knew differently. “When we read that script, Shonda came up to me and said, ‘I have the next script, and I want you to read the whole thing… before you shoot that scene,'” Stanchfield says. “And that was the episode that flashes back to Election Night and follows Abby’s trajectory, her getting blackmailed up until that moment.” Being allowed to lay eyes on what was even an episode ahead “was a treat,” the actress effuses. “Usually, we get a little bite of something and that’s it. The rest we have to figure out.”

Of course, there are some who refuse to “rest” and upon sitting down for the table read will defy the boss’ instructions and skip ahead to the last page. And by “some” we mean “Joshua Malina,” who regularly would flip to the end to see if David Rosen survived (which, if you recall, he once nearly didn’t. #RIPJames).

“Apparently Shonda was onto me… and she had the writers create one script in which my character died,” he recalls. “I did sit down, I did look ahead, and I was sitting next to Scott [Foley] when I said, ‘Dude, I think I die in this one!’ It said something about ‘blood pouring out of the drill holes.'” Malina’s well-established craftiness, though, would serve him well, as he immediately reached for castmate Bellamy Young’s copy of the script and saw the real ending.

“I had a bad minute to minute-and-a-half,” the actor recalls. “You got me!”

Scandal resumes its final season this Thursday at 9/8c, with Episode 8 of 18.