It’s too bad that How to Get Away With Murder won’t cross over with Scandal for another few weeks. After the events of Murder‘s winter premiere Thursday night, just about every character could use some help from Olivia Pope.

When last we saw Annalise Keating and her inner circle of emotionally broken humans, things were bad: Laurel & Co. had successfully swiped those Antares files from Caplan & Gold, but classmate Simon accidentally shot himself in the head before the night was through. Asher was arrested. Laurel gave birth in a broken-down elevator, and Annalise was left to resuscitate the newborn on the floor of the Easton Hotel.

And over the course of Thursday’s hour, all of it got much, much worse. You’ll at least be glad to know that the baby cries we heard at the end of November’s fall finale were legit; Annalise was indeed able to save Laurel’s son via the most delicate CPR of all time. But once the baby is brought to the hospital, Annalise and Frank seem to run into a roadblock at every turn. First, they aren’t able to see the baby, prompting Frank to lie that he’s the baby’s father in order to score visitation — even though, a few scenes later, the long-awaited results of Laurel’s paternity test reveal that Frank is not the father, after all.

Annalise then spots Jorge Castillo entering the NICU and discovers that Laurel’s father has been granted emergency custody following the baby’s premature birth — and she’s then handed even more paperwork that reveals interesting tidbits about Laurel’s private life. For one, apparently she had been doing cocaine, which is what really induced her early labor in that elevator. And she suffers from bipolar disorder, which is part of the reason why the hospital has her in an involuntary psych hold.

But Annalise isn’t buying any of it. Clearly, Jorge is getting custody of the baby and fabricating all these details about Laurel as part of a bigger power play. But there’s nothing that Annalise or anyone on her side can do about it, at least in this episode. Jorge has his grandson transferred to a different hospital where he’ll get better neonatal care, leaving Laurel unable to see her baby after she finally wakes up. (Between Laurel’s “Where’s my baby?!” panic attack and Annalise’s fury over the baby’s relocation, Shirley MacLaine’s Terms of Endearment moment might have just been knocked down the list of most memorable hospital scenes.)

After getting sufficiently sedated, Laurel confesses that Dominick — her father’s associate and Wes’ killer — called her the previous night, just as the Caplan & Gold party was taking place. (Finally, the mystery of that blocked call to Laurel’s cell phone has been solved!) Dominick tried to talk her out of her revenge plan, revealing to Laurel that her father knew she was still pregnant, despite her telling him otherwise. “Imagine what else he could know,” Dominick had warned. But Laurel didn’t listen, and now she’s tortured by the knowledge that she caused all of the chaos currently going down among her friends. 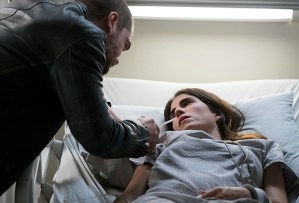 Near the end of the hour, after mulling her options, Laurel reveals to Annalise and Frank that she wants to call Dominick. Sure, he killed Wes and has spent his entire life answering to Jorge Castillo… but the fact that he called Laurel, urging her to call off her Caplan & Gold hack, must mean he finally wants to be a good person, right? Probably! But Laurel’s new plan immediately runs into a snag: When she attempts to call Dominick, and his cell phone suspiciously goes off in Frank’s jacket pocket, Frank is forced to reveal that he killed Dominick earlier that night, after fearing that Dominick had swiped Laurel’s hard drive (and all of its Antares files) from her purse.

Complicating things even further — because they weren’t quite messy enough already — is the episode’s final scene, in which Frank discovers a voicemail from Wes on Dominick’s phone. “It’s Christoph,” Wes says, as we flash back to the cab ride where he made this very phone call on the night he died. “I’m in trouble. We all could be. Call me as soon as you get this.” But of course, instead of calling Wes back that night, Dominick just killed the kid instead. Very poor phone etiquette!

* Though there’s still the potential for Asher to get charged by the D.A.’s office, Bonnie buys him enough time to get him released from jail and reunited with his friends. It’s a rare bright spot in this very dark hour… until Asher informs Michaela, Oliver and Connor that Simon is still alive, even after that shot to the head. They immediately begin to panic at the idea of Simon telling the police what really happened at the Caplan & Gold party once he’s coherent enough to do so — and when Oliver realizes that they all want Simon to die just to save their own skins, he’s rightfully horrified, making them all promise that they won’t go anywhere near Simon for the foreseeable future.

* Just as she’s leaving the Caplan & Gold party to head to the hospital, Michaela is cornered at the elevator by Tegan, who tearfully asks her intern for the truth about what happened to Simon. Michaela weeps through her tall tale that Simon stole those Antares files and brought that gun to the office, but it’s not enough to convince her boss. “You’re not as good a liar as you think,” Tegan informs Michaela, just as the doors close. Because there’s nothing more #TGIT than a dramatic conversation at an elevator bank.

OK, your turn. What did you think of Murder‘s winter premiere? Drop a comment below with your reactions to the episode.