Whether Darren Criss was shooting people in the face, puking in public bathrooms or casually rubbing his crotch while standing over a sleeping couple, he sure made Wednesday’s season premiere of American Crime Story feel like the darkest episode of Glee yet.

I’m half-joking, but considering this is Criss’ first series-regular TV role since Blaine Anderson warbled his final warble in 2015 (not to mention Criss’ professional reunion with Glee boss Ryan Murphy), I trust you’ll overlook my inability to disassociate — at least in this first week.

Truth be told, Criss’ take on Andrew Cunanan — the sexually manipulative serial killer who murked fashion icon Gianni Versace in 1997 — is impressive, thoughtful and downright chilling, a far cry from the singing bottle of hair gel in a sweater vest he brought to life on the Fox comedy. Let’s discuss: 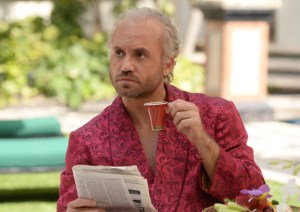 1990 | Wednesday’s premiere turned the clock back to the year Cunanan first encountered Versace (played by Edgar Ramírez) at a gay club in San Francisco. He was basically “that guy” at the party — the one who shows up uninvited, then proceeds to inject himself into strangers’ conversations — but his boyish charm and Harry Potter glasses worked their magic on Versace, earning him a date to the opera. I guess it helped that Cunanan presented a completely fictitious backstory, one that made him approximately 100 percent more Italian than he actually was.

Cunanan excitedly (and inaccurately) relayed this meeting to several of his friends the next day, a series of conversations that offered  a glimpse into his twisted psyche. While speaking with a straight married couple, Elizabeth and Phil Cote (played by Annaleigh Ashford and Nico Evers-Swindell), he labeled Versace the F-word. But during a subsequent chat with a fellow gay, Cunanan had no problem referring to his and Versace’s opera meet-up as a date. “You tell gay people you’re gay and straight people you’re straight,” the friend protested. “I can’t keep up.”

1997 | Before diving into Versace’s history with Cunanan, the episode introduced us to the fashion icon in all his Miami Beach splendor. And despite his international fame, Versace was also painted as somewhat of a local celebrity — like a post-Christmas Carol Ebeneezer Scrooge, receiving hugs and hellos from all the people he encountered in town. And it was after one of these jaunty strolls that Versace was confronted by Cunanan, who shot him point-bank at the gate of his mansion. (The dead dove next to Versace felt a little on-the-nose, so I fact-checked — it really happened.) 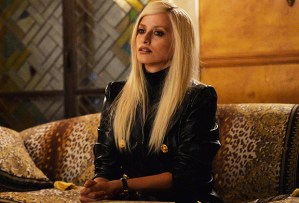 Versace’s sister (played by Penelope Cruz) sauntered into the party about three-quarters of the way through the premiere, and while Donatella always commanded attention, most of her mourning breath was spent belittling her brother’s lover. When Antonio broke down in tears, her response was, “That’s not what I need from you right now.”

Speaking of Ricky Martin’s character, it was kind of shocking to hear how Donatella — and even the police — regarded his relationship with Versace. Donatella berated him for not protecting her brother, which she called his one job, and the police seemed far more interested in details about Versace’s sexual behavior than the details surrounding his untimely demise. 1997 doesn’t feel like it was that long ago… and yet it was.

The premiere concluded with Cunanan still at large, though the authorities — led by a mustachio’d Will Chase — were hot on his trail. (Also, yes, that was New Girl‘s Max Greenfield playing Ronnie, the guy found living at Cunanan’s last known address.)

Your thoughts on Crime Story‘s second season premiere? Grade the episode below, then drop a comment with your full review.

(A secret confession for those who have scrolled this far: Do you have any idea how difficult it was for me not to make a stupid joke about Darren Criss showing his butt in this episode? Believe me, I thought of ’em all, including “he put the ‘ass’ in ‘assassination.” But I refrained, for I am a professional… and that’s what Twitter is for.)